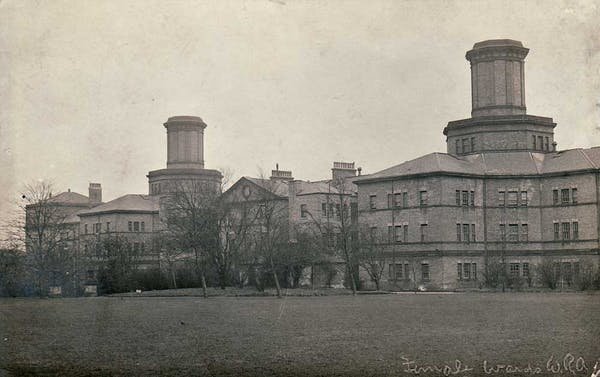 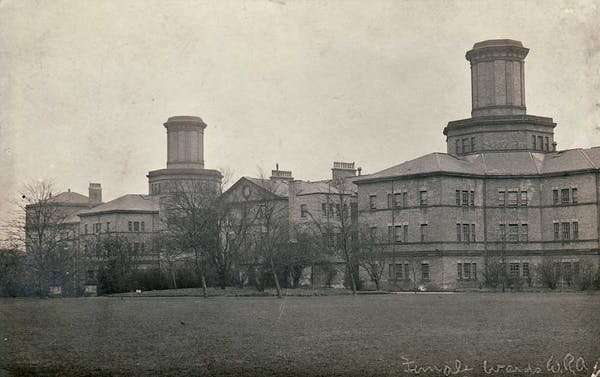 In 1849, a cholera epidemic that was sweeping through Britain reached West Riding Asylum in Wakefield, West Yorkshire. The deadly disease soon spread through the wards. Searching for the source of the outbreak, the consulting physician eventually settled on an individual who had been admitted while ill. The doctor described this unfortunate patient as the “unconscious messenger of death”.

Over a century and a half later, a care-home owner in Devon—alarmed by the fact that local care homes could admit residents with COVID-19—expressed his fears in a strikingly similar way. In early April 2020, the government issued guidelines that permitted taking in new residents even if sick. This, the care-home owner argued, would be “tantamount to importing death”.

Care homes are the epicentre of the COVID-19 pandemic in the UK. Compared to all other settings, they have seen the biggest relative increase in deaths since the start of the outbreak. Most of the vast asylums of the Victorian era closed in the 20th century, as attitudes to treating mental health changed. Yet there are haunting parallels to be seen. Responses to, and experiences of, an outbreak of disease at one of these asylums back in the 19th century are disturbingly resonant today.

Cholera, an acute diarrhoeal disease, claimed the lives of more than 100 patients at West Riding Asylum in 1849. Such was the scale of the tragedy that the consulting physician, Thomas Giordani Wright, was commissioned by the asylum’s regulators to investigate and account for this disaster. The result, a report published in 1850, allows us to reconstruct the story of the cholera outbreak in minute detail. It is a story which foreshadows our own.

The 19th century witnessed a huge expansion in the number of asylums in England.

In 1808, the British government passed legislation that allowed counties to collect and spend taxes on building asylums for those unable to pay for private treatment for mental illness. While most counties didn’t begin construction until they were forced to by further legislation in 1845. Yorkshire was quick off the mark. West Riding Asylum opened its doors in November 1818, initially with a view to accommodating 150 patients. By the middle of the century, extensions and a second building meant that more than 500 patients filled its wards.

Global cholera pandemics were a repeated problem throughout the 19th century. When the disease hit Britain in the autumn of 1848, Yorkshire was initially spared. But by September 1849, it had reached Wakefield. In his report, Wright conjures an image of the institution besieged, with “the spread of the pestilence all around the asylum”.

Some of those who had been attached to the asylum for a long time, like Wright himself, might have taken confidence from the fact it had escaped disaster during the previous cholera pandemic to hit England, in 1832. In 1849, sadly, it would not be so lucky.

In his report, Wright sought to understand how the disease had infiltrated the institution. He was doing so a few years before John Snow’s discovery that cholera was waterborne. Yet an inspection of both the drainage and ventilation did take place at West Riding Asylum; both were given a clean bill of health. Indeed, the inspectors—Messrs West and Dawson—were left to conclude that “the visitation, fatal as it has been to many, must be considered either as the immediate infliction of Divine Providence, or as dependent on causes of which nothing as yet is known”.

Wright looked elsewhere for causes. And in spite of his admission that “the laws of contamination are, in fact, little known”, he set his sights on one Elizabeth Fenton—his “unconscious messenger of death”.

The hunt for ‘patient zero’ begins

Elizabeth Fenton, a person with epilepsy, had been admitted to West Riding Asylum on 17 September 1849. She came from the nearby Gomersal Workhouse, where she had been for the past six years after her husband, a stonemason, abandoned her and their two children. Although her transfer had been recommended some weeks earlier, when the local official called at the workhouse to take her to the asylum, it took people at the workhouse by surprise.

Strokes of ill luck might, in part, explain the disastrous chain of events which followed. Two residents at the Gomersal Workhouse had died of cholera the night before Fenton was transferred; one of them normally slept in the same room as her. Yet authorities may have been lulled into a false sense of security by the fact that Fenton had not had direct contact with these residents before her transfer. She had suffered an unusually violent seizure that week, and so had spent most of her last nights in the workhouse restrained in a chair in another room. And the day before her transfer, she had been given a laxative to help relieve constipation. An early warning sign of cholera infection, diarrhoea, was thus concealed.

By the evening of her first day in the asylum, Fenton had developed symptoms. She was isolated immediately, as it had become clear that an outbreak was underway in Gomersal Workhouse. Her room was locked, and access restricted to a select few. But within a week, four more women had fallen ill. From that point on, the disease spread like wildfire through the female as well as male patient populations of the asylum.

Since the male cases were known not to have had any direct contact with any of the female cases, and the original four women were not even thought to have seen Fenton, Wright was stumped to explain whether the mode of transmission was “gaseous or solid, material or immaterial, vegetable or animal, magnetic or electrical”.

But he was firm in his conclusion that “infection was in some way brought into the asylum by that patient”. He cinched his argument by referring back to the 1832 pandemic, which the asylum had escaped unscathed. The only difference, he argued, between the two contexts was that no new patients from infected districts had been admitted in 1832, whereas in 1849, they had: Fenton. Case closed.

Yet Wright pursued this line of investigation further, with prosecutorial zeal, by turning his attention to Gomersal Workhouse. Fenton had brought the disease from Gomersal to West Riding Asylum—but how, in the first place, had it arrived at Gomersal?

From the medical officer at the workhouse, Wright learned that on 6 September “a dirty Irish woman, and her four children, were brought into the workhouse”. Showing signs of cholera, they had been taken to the workhouse hospital, where the mother had died just hours after arrival. One of her children died “a day or two after”; the exact timing was not thought worth recording. And just a day before Fenton was transferred to the asylum, two other women at the workhouse died.

As we know all too well from COVID-19, Aids and other recent pandemics, the hunt for the first person to fall ill—known as “patient zero”—collides with other vectors of stigmatisation. In the case of COVID-19, this has been clear above all in the horrifying rise in anti-Asian racism and xenophobia worldwide.

By 1849, the arrival in England of hundreds of thousands of Irish displaced by the Great Famine had contributed to wider anti-Irish sentiment, cementing a prejudicial association with poverty, dirt and disease. Forced into desperate living conditions, including dog kennels and cellars, this was an association which drew vicious strength from the staggeringly high death rates among the Irish during times of epidemic disease. As well as being epidemiologically unhelpful, Wright’s explicit identification of a local Irish patient zero fed into growing anti-Irish racism and a representation of the Irish as carriers, rather than fellow sufferers, of the disease.

With cholera loose in the institution, the medical officers and attendants at West Riding Asylum tried to fight it using the full arsenal at their disposal: removal of patients to a separate cholera ward; improvements in diet—including “extra allowances of tea and brandy for supper”; fumigation of wards; and laundering of all bed sheets and clothes.

But as in the current pandemic, there was no cure, no vaccine. By the end of the year, more than 100 residents had died of cholera. Nineteen had died in just a single day towards the end of October.

In what Wright evidently considered to be a small mercy, the patients “generally did not appear to be much affected by fear, nor were they aware of the extent of the mortality”. But just as in today’s care homes, for the staff of the institution, it was traumatic. “It was a period of awful emergency, and the consternation of all was increased by the fearful mystery of the pestilence, the rapidity of its attack, without previous symptom or warning, and the little more than failure of every effort, to mitigate its course, or avert its progress.”

Amid this horror, it is unsurprising—particularly, unhappily, to us now—that residents were not the only fatalities. On November 4 1849, Mrs Reynolds, the chief nurse of the ward set up to tend to cholera cases, died of the disease.

In a separate report in November 1849, the director of the asylum quoted Reynolds as saying: “If I should die, I shall have the satisfaction on my death bed of knowing that I have done my duty.” Wright later wrote movingly of “her heroic and unremitting devotion to her duties” and “her kindness and humanity”.

Reynolds was not alone in being held up for praise. In 1851, the director of the asylum looked back on the service of all staff in these harrowing months “with gratitude and admiration”. And while noting that “no pecuniary recompense can adequately remunerate such services”, he drew attention to the princely sum of £264 which had been distributed among staff by the visiting justices, and a further—unspecified but “very large”—sum disbursed by a visiting magistrate (there to oversee Wright’s investigation) in a private capacity.

There is a poignant coda to this story, however. In contrast to the “substantial tokens of public approbation” the surviving officers and attendants had received, Wright used his report to draw attention to the sad inadequacy of Reynolds’s final resting place: a grave “without a mark to record her fate”. He pleaded with the magistrates and medical officers to make contributions so that her life and service could also be properly remembered.

Wright rounded off his report with a “lessons learnt” section—a genre with which we are likely to become all too familiar in the coming months and years.

While noting that changes to diet and fumigation appeared to bear some fruit, the lesson Wright was desperate to hammer home was the importance of “the precaution of not admitting into the asylum fresh patients from infected districts”. In that respect, his advice was much stricter than that issued by the Board of Health, the body charged with the control of epidemic disease, whose confident assurances—he suggested—had influenced people “to disregard all risk of communication”.

Wright concluded: “We have been fatally taught, that it is most important to use every possible vigilance to avert the approach of cholera; for, if it once find an entrance, no human resources are of much avail, to mitigate its intensity or abate its ravages.”

The colossal asylums of the 19th century may no longer be with us, but the parallels haunt us still. The risk to care homes was clear early in the contemporary crisis, according to chief scientific adviser Sir Patrick Vallance. And the vulnerability of institutionalised populations was not only foreseeable; doctors during the 1849 cholera outbreak tried to pass down lessons to future generations.