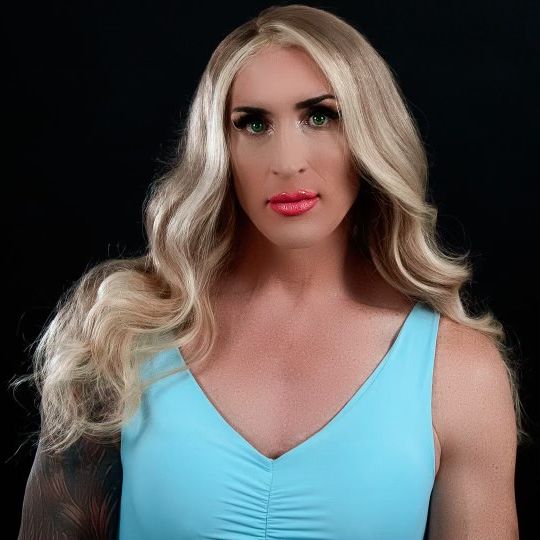 Gabbi Alon Tuft is a retired American professional wrestler. She’s best known for her time with WWE, where she wrestled under the stage name Tyler Reks. Tuft wrestled in widely televised WWE events, including RAW, SMACKDOWN, and WRESTLEMANIA. In February 2021, Tuft came out as a trans woman and has since been an activist within the transgender community.

BACK WHEN I WAS YOUNG, no one was really familiar with the term transgender. It wasn’t a thing you saw in the media, and there was no Internet. What I did know was that dressing up in my mother’s clothing at the age of 10 was considered “bad” by society.

Fast forward to about five years ago. This is when I started experimenting with getting dressed in women’s clothing again. I would do it when no one was home and borrow some of my wife’s clothing. When lockdown began, and once my daughter, Mia, went to bed at night, that’s when I really began experimenting with presenting female inside my home. At first, it was a once in a while thing, but then deep into lockdown—once everyone had lost track of what day of the week it was—I started presenting female every night.

My wife, Priscilla, totally supported me. She would help me with my hair and makeup, and we would sit around and talk for hours. I felt so free to let my emotions go and just really embody a feminine persona.

But at the end of the night, when I had to take the hair, the makeup, and the feminine clothing off, so I could go to bed and not wake up in the morning with my daughter looking at me like, “Daddy, why are you dressed like that?”—that’s when I started to feel emotional pain. When presenting male felt like the costume, like the show, that’s when I really began to question my gender.

Luckily, Priscilla saw the writing on the wall. She was so loving and accepting and knew that this was part of my internal being—my soul—that was blossoming. She knew it needed to come out. Priscilla lovingly taught me the basics of makeup and how to walk in heels. I remember one night after she had been doing my makeup for weeks, she asked, “Why don’t you try?” I’m like, “Wait, me? What? I’m going to look like a clown when I’m done.” But she slowly let me drive, and eventually, I got the hang of it. 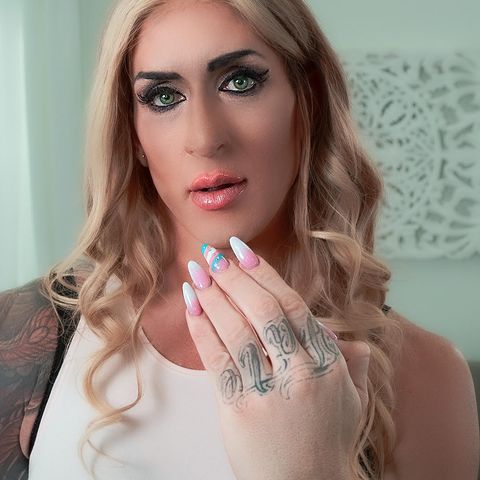 There was, however, one time when a miscommunication occurred. She said, “So look, you’ve been getting dressed up just about every night, and in the daytime, when you’re back to presenting male, I’m having a difficult time with that. I’m still seeing an image in my head of you as a woman.” While it really wasn’t a show of disapproval, I took it as such. Being the extremist I was, I told myself that this has got to stop and that this has to be bad for my marriage and family. That’s when I cut everything off. This moment was a pivotal point for me because immediately after I stopped presenting female, I then became really, really depressed.

I remember one very dark night; I was in the master bedroom walk-in closet dealing with some very dark thoughts. The pain of not being able to live my life as a female had become so intense that I felt completely overwhelmed and felt that I should just end it all. It was like a computer program was running in my brain where I almost felt like I didn’t have a choice. I was lying on the ground crying uncontrollably. I knew that if I were to stand up, I’d reach for my gun on the top shelf, put the barrel to my head, and pull the trigger. So I yelled out for help, and Priscilla heard me. I’ve never once in my life cried for help like that. I was bawling. Priscilla came running in, and she saw the situation and gave me a big hug, told me everything was going to be okay, put a cold washrag on my neck, and slowly walked me out of the master bedroom closet.

Once she saw I was feeling more stable, she went upstairs and ran a bath for me, putting in a bath bomb and some essential oils. She took off my clothes and helped me in the tub. She then sat with me until I was calm and the dark feelings had passed. This was the kind of support that I feel so incredibly lucky to have.

This event is what led to the talk when I came out to Priscilla as transgender. But by this point, Priscilla already knew. She’s very close with her mom, and they had conversations where Priscilla said, “I don’t think this is a temporary thing anymore. It might be permanent.” So I think she actually knew before I did, which is probably why she was so loving about it. 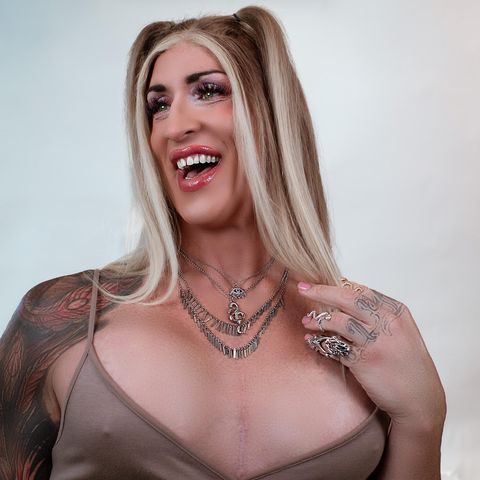 While I was nervous to tell Mia, my nine-year-old daughter, she was so incredibly supportive when I told her. She has this app she plays on her phone, where the avatars can “gender-bend” and switch genders. I explained to her that daddy was going through a gender-bend himself. She gave me the biggest hug and told me she’d never make fun of me. (That was one of my biggest fears: people making fun of me.) Now she’s the first to say she loves LGBTQ people.

And my neighbors, the entire community has been accepting, which frankly, I found surprising because I live in Leander, one of the reddest parts in Texas. But I’ve never had anyone say anything negative about me and have never even heard anything whispered under people’s breaths.

I think it’s in part because I love everybody. It’s hard to hate somebody who smiles all the time and who is so loving to you no matter what. So I think that has a lot to do with it. I always smile everywhere I go.

“If I can make this journey easier for anyone else by being visible, just one person, it’s an honor for me to do that.”

And I try to spread that love and joy too, which is why it’s been heartbreaking hearing that trans kids can’t play in sports when attempting to present in their true gender identity. I know we need a solution to this, and at this time, I don’t have one. I know at a certain level, sports do become competitive, and scholarships are involved, but before that level, sports are supposed to be fun.

The second we stop smiling and it’s no longer fun—we shouldn’t be doing it. Remember, sports are supposed to be about building friendships. I’m seeing that being ripped away from our children. I just imagine, what if Mia came out to me as trans when she’s at that age? She would feel like she was exiled if she wanted to play but couldn’t. That would break my heart.

And really, all I want to do is make it easier for trans people of all ages. What I went through was emotionally traumatizing, but I made it through, and now I feel called to carry the torch for my trans siblings. If I can make this journey easier for anyone else by being visible, just one person, it’s an honor for me to do that. I don’t want anyone else to have to go through the same pain and anguish that I experienced. I don’t want anyone else to be too scared and think it’s easier to take a gun to their head than to keep living. So anything I can do to help, I will.