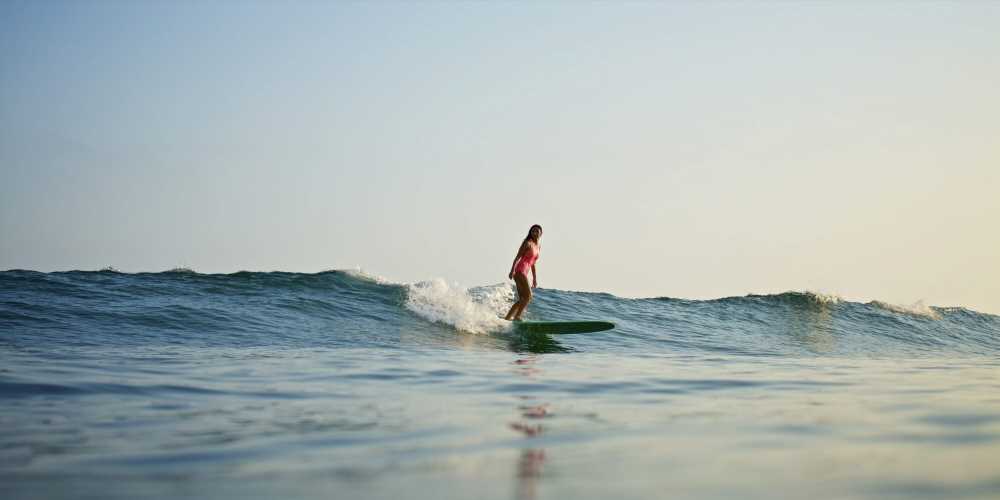 A 22-year-old surfing standout was struck and killed by lightning as she was training in the waters of her home country, El Salvador, on March 19.

Katherine Diaz had been training for an upcoming surfing event—one that she hoped would qualify her for this summer's Olympics—when she was struck. According to CNN, Diaz was in the water at El Tunco beach in southwest El Salvador with her friend and uncle when the tragedy happened.

"Katherine came over to hug her [friend], as soon as she finished hugging her, the noise was heard," Diaz's uncle, Beto Diaz, told a newspaper in El Salvador, CNN reports. "She, the friend, was thrown by the force of the lightning strike too, the board threw me back. Katherine died instantly."

The lightning struck shortly after Diaz had entered the water. According to the Salvadoran Surf Federation, via the Olympic Channel, "the sky was clear and it was an unforeseen storm that did not seem to carry much electrical intensity either." After the unexpected strike, emergency services arrived, but they were unable to revive Diaz.

The International Surfing Association honored Diaz in a tweet, saying that "Katherine embodied the joy and energy that make surfing so special and dear to us all, as a global ambassador of the sport." According to the association, Diaz excelled at the international competition level and represented her country with pride.

"We send our heartfelt condolences to Katherine's family, the surfers of El Salvador, and to all those in the international surfing community whose lives she touched. We will never forget you," the International Surfing Association also tweeted.

Diaz had worked as a chef and had opened her own business in El Tunco, USA Today reported. According to CBS, a funeral was held this past weekend, pictures of which can be seen on El Salvador's surfing federation's Facebook page. Tomorrow, a paddle-out ceremony will be held to honor her, per USA Today.

According to the National Weather Service (NWS), about 30 people in the US die from lightning each year. Another 240 are injured. Of those who are killed, about two thirds had been participating in outdoor recreational activities at the time of the strike.

It's estimated that the US has 20 million to 25 million cloud-to-ground lightning flashes per year. "Some of those flashes strike directly under the storm where it is raining, but some of the flashes reach out away from the storm where people perceive the lightning threat to be low or nonexistent, and catch people by surprise," the NWS reports.

Being in water at the time of a lightning strike may also make matters worse. According to the National Oceanic and Atmospheric Administration (NOAA), though lightning doesn't strike the ocean as much as land, when it does, it can spread out over the water, which acts like a conductor. When that happens, the lightning strike can affect boats that are nearby and any living creatures that are near the surface.

Generally, a significant lightning threat extends outward from the base of a thunderstorm cloud about 6 to 10 miles. With that in mind, the NWS suggests that you should stop your activity if you see lightning or hear thunder or if the sky looks threatening. "Thunderstorms can develop directly overhead and some storms may develop lightning just as they move into an area," according to the NWS. The NOAA also suggests that you get out of the water immediately if you're at the beach during a thunderstorm; and if you're at sea away from land, it's recommended you stay low in the boat or retreat to a cabin.

Once the storm has passed, the NWS suggests waiting at least 30 minutes after the last thunder before going back to your outdoor activity since electrical charges can still be in the clouds.

And if you or someone you know is struck by lightning, it's imperative to seek medical attention immediately, per the NWS. That means calling 911, performing CPR, or using an AED—all of which are crucial to keep the person alive until professional medical help can arrive to the scene.