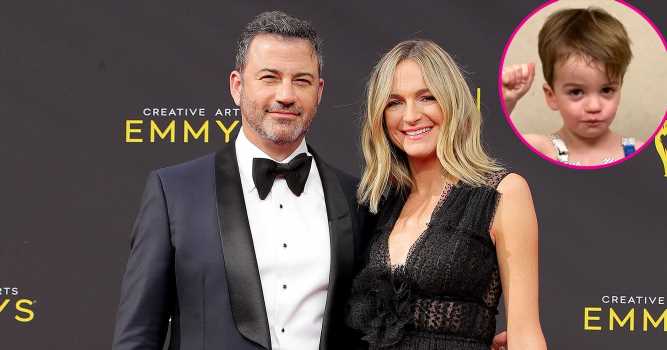 “We’re two weeks away from the election, and there is so much more than the election on the line,” the Jimmy Kimmel Live! host, 52, said on his ABC show. “I want to bring us back to focus on something we can’t afford to forget, [which] is healthcare.”

The New York native went on to introduce a video segment, explaining, “My wife made a video that deals with our experience when it comes to preexisting conditions. We’d like you to watch this and pass it around to anyone who may have forgotten what this election is about.”

In the footage, McNearney, 42, documented their baby boy’s congenital heart condition, from his tetralogy of Fallot with pulmonary atresia diagnosis to the three heart surgeries that followed. The Missouri native showed the little one’s scars as well as photos of him hooked up to different machines and tubes over the years.

“Over 60 doctors’ appointments in three years,” the actress, who also shares daughter Jane, 6, with Kimmel, wrote alongside the video.

McNearney urged viewers to “vote with your heart” before sharing videos of Billy laughing and playing with his family. “We are raising him to fight for less fortunate kids,” she concluded. “Americans take care of one another.”

Kimmel first revealed his youngest child’s heart condition in May 2017, explaining that Billy’s pulmonary valve was blocked and there was a hole in his heart wall. “On Monday morning, Dr. Vaughn Starnes opened his chest and fixed one of the two defects in his heart,” the Emmy nominee said at the time. “He went in there with a scalpel and did some kind of magic that I couldn’t even begin to explain. He opened the valve, and the operation was a success. It was the longest three hours of my life.”

Two years later, the Serious Goose author exclusively told Us Weekly that the toddler was “doing great,” adding, “He thinks he’s Spider-Man now, so we’re safe from crime. He wears the costume all the time. He’s shooting webs all over the house.”

The comedian is also the father of Katie, 29, and Kevin, 27, with his ex-wife, Gina Kimmel.