As people across Maryland and the country seek their first dose of COVID-19 vaccine, Jean Armstrong got her third.

The Baltimore County public school administrator was one of the first people to get a pair of shots of the Pfizer/BioNTech vaccine last May as studies began to test its safety and efficacy. She returned this week to the University of Maryland in Baltimore to help researchers understand whether a booster could continue to keep her from getting seriously sick from the coronavirus.

“I’m a believer in vaccines and think they work, and it’s important to be involved,” Armstrong said of her willingness to be vaccinated again. “It seems like realistically we have to be prepared for boosters and vaccines for variants.”

Researchers and vaccine manufacturers are actively preparing for the possibility that people will need to get another vaccination or regular ones to keep at bay the current coronavirus or a mutated and more nefarious version.

The vaccines now approved for use are considered highly effective at staving off infection, particularly severe infection, but no one knows how long immunity lasts. It’s widely believed that it wanes at least somewhat over time.

And data is beginning to show that the vaccines are at least somewhat less potent against emerging variants. There are several now widely circulating, including ones discovered first in South Africa, Brazil and the United Kingdom. Others with potentially concerning mutations have been logged in the United States in California and most recently in New York.

The research seeks to answer some questions and “grease the wheels” for others, said Dr. Kirsten E. Lyke, who is helping oversee the study at the University of Maryland School of Medicine’s Center for Vaccine Development and Global Health.

Specifically, Lyke, director of the Malaria Vaccine and Challenge Unit, said researchers will look at immunity before and after a booster, which is a regular dose of the Pfizer vaccine. They also will assess how well people tolerate another shot.

Twenty-four hours after her third shot, Armstrong, a Harford County woman in her 40s, said she’s not had side effects except a bit of arm soreness. She had more flu-like symptoms from the first two shots she received last May.

Federal regulators gave the Pfizer vaccine authorization for emergency use in December after a remarkably speedy development period of just months rather than years. It continues to be evaluated for full approvals.

A similar vaccine from Moderna also has been authorized and a third from Johnson & Johnson is expected to get the go-ahead for use within days.

All are considered highly effective against severe disease. Researchers say, however, that the public may need another shot eventually. People may even need to have annual shots, as they do for the flu.

The vaccine makers are preparing for that possibility now, as well as moving quickly to adapt the vaccines for variants.

The U.S. Food and Drug Administration offered guidance this week to assure the public that the adapted vaccines will be tested, but the process won’t be delayed. The vaccine makers will be permitted to do small-scale studies of maybe a few hundred people to test the upgrades, rather than repeat large studies with tens of thousands of people for each vaccine.

“We know the country is eager to return to a new normal and the emergence of the virus variants raises new concerns about the performance of these products,” said Dr. Janet Woodcock, acting FDA commissioner, in a statement. “By issuing these guidances, we want the American public to know that we are using every tool in our toolbox to fight this pandemic, including pivoting as the virus adapts.”

Pfizer and Moderna both said this week that work is underway.

Pfizer said Thursday that it was studying a third dose in its initial phase 1 participants, who include Armstrong, to evaluate the safety and tolerability of a booster shot of the existing vaccine. The vaccine was initially tested at four sites, including Maryland.

That study also will inform efforts to adapt the vaccine to address emerging variants, said officials with the New York-based pharmaceutical giant.

“While we have not seen any evidence that the circulating variants result in a loss of protection provided by our vaccine, we are taking multiple steps to act decisively and be ready in case a strain becomes resistant to the protection afforded by the vaccine,” said Albert Bourla, Pfizer chairman and CEO, in a statement.

“This booster study is critical to understanding the safety of a third dose and immunity against circulating strains,” he said.

Moderna is following a similar path, and its officials said this week that the Massachusetts drugmaker already had sent a vaccine adapted for the variant found in South Africa to the National Institutes of Health for study.

The officials said the company would update its vaccine as many times as necessary.

“As we seek to defeat COVID-19, we must be vigilant and proactive as new variants of SARS-CoV-2 emerge,” said Stéphane Bancel, Moderna CEO, in a statement. “Leveraging the flexibility of our mRNA platform, we are moving quickly to test updates to the vaccines that address emerging variants of the virus in the clinic.”

At the University of Maryland, the first few people out of the hundreds who initially participated in the phase 1 trial got their third dose this week

All of those participants are being followed for more than two years as part of the FDA’s final approval process for the vaccine. Armstrong said she was surprised to be called back already for another shot, but wanted to help researchers as the pandemic evolved.

Despite her discomfort with needles, she had agreed to participate in another study years before, one that produced a vaccine for the H1N1 flu outbreak in 2009. She volunteered again last year.

Scientists don’t know why some people have more adverse reactions than others. The previous COVID-19 shots had given Armstrong chills, body aches and a fever, which are typical and normally short-lived responses.

“I was pleasantly surprised this time,” she said. “It’s 24 hours later and my arm hurts just a little bit. It’s been easy so far.”

Lyke said that as researchers were searching initially for the right vaccine makeup and dose, participants were given any of four versions of the Pfizer vaccine in three different amounts. Others were given a placebo, but they have since been fully vaccinated.

She said all the versions induced an immune response in people, but by June researchers had narrowed the vaccine and dose to the most effective and best-tolerated one.

Messenger RNA vaccines had long been studied for infectious diseases and even cancer, but the technology had never been approved for use. Instead of weakened or dead virus, mRNA vaccines deploy a bit of the virus’ genetic code to instruct cells to produce more of the viral protein, which in turn induces an immune response. The resulting antibodies fight the virus when they later come into contact with it.

All participants getting a booster shot at Maryland are at least six months past their second vaccination. Researchers took blood before and after the latest shots to determine the effects.

“If the immune response waned we’d know they needed a booster,” Lyke said. “And we wanted to see how they would respond to a booster, meaning they tolerated it and had another good immune response.”

She said it’s unknown whether anyone will need a booster, will need seasonal boosters or will need adapted shots for variants. 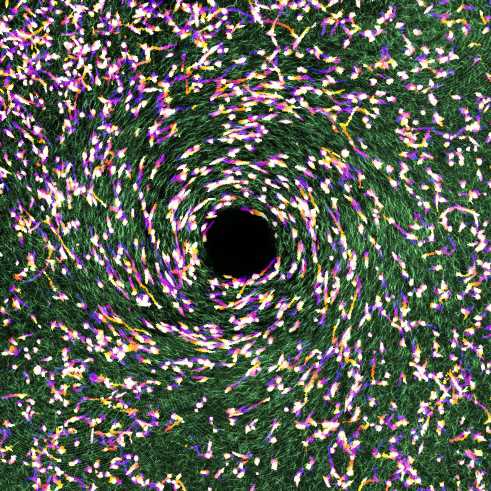