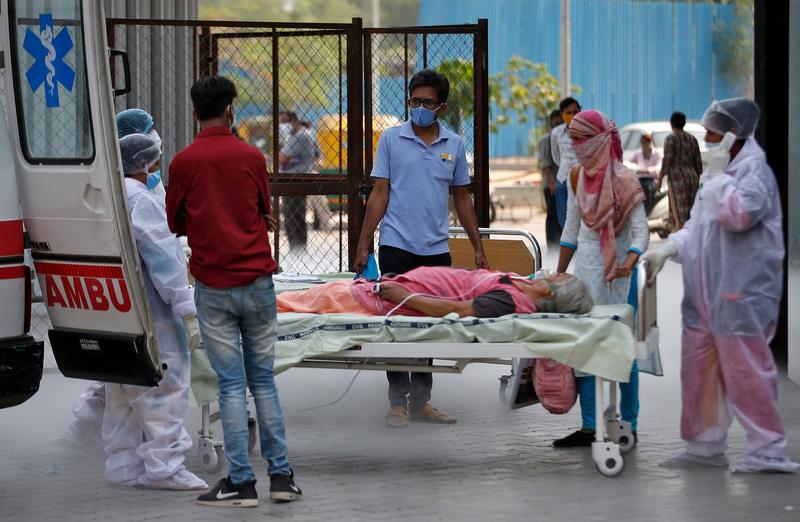 NEW DELHI (Reuters) – The second surge of COVID-19 cases in India has swamped hospitals much faster than the first because mutations in the virus mean each patient is infecting many more people than before, epidemiologists and doctors say.

A patient lies in a bed as she is being shifted to a hospital for treatment, amidst the spread of the coronavirus disease (COVID-19) in Ahmedabad, India, April 15, 2021. REUTERS/Amit Dave

India’s daily infections skyrocketed more than 20-fold to more than 200,000 on Thursday since a multi-month-low in early February, though the government has played down the role of mutants in the latest rise, the worst anywhere this month.

The world’s hardest-hit country after the United States has reported about 950 cases of people contracting the variants first detected in the United Kingdom, South Africa and Brazil.

“The point is that these variants of concern are still not on top of the discourse,” said epidemiologist Rajib Dasgupta of New Delhi’s Jawaharlal Nehru University.

“Even if it is a new variant, you need to do the same things” to control it and treat patients “but it requires a different urgency to recognise that”, he said.

Doctors at New Delhi’s All India Institute of Medical Sciences have found that one patient is now infecting up to nine in 10 contacts, compared with up to four last year.

Scientists in Britain say the B.1.1.7 variant here, widely known as the British mutant, is 70% more transmissible than previous variants, and much deadlier.

The northern Indian state of Punjab, which has reported one of the highest recent fatality rates in the country, said late last month 81% of 401 COVID-19 samples it sent for genome sequencing were found to be the British variant.

“More children are reporting high-grade fever compared to last year. We have 35-year olds with pneumonia in intensive care, which was not happening last year.”

The government has mainly attributed the big rise in cases to a reluctance to wear marks and crowding.

Still, it has refused to call off a mass gathering of Hindu devotees for a festival and its ministers are addressing tens of thousands of largely mask-less people in election rallies.

A scientist at the National Institute of Epidemiology said more evidence was needed to directly link the rise in cases to the variants, but that anecdotally that seemed to be the case.

“There are in-vitro experiments which can also tell us about the infectivity, the severity, how lethal it is, etc, but those are not completed yet, they are ongoing,” said Tarun Bhatnagar.

“We haven’t had a virus that has spread so rapidly, and we haven’t had the time to study it. Everything is on the go. We are dealing with it, being affected by it and studying it. The pace of every thing is too fast.”

But with crowding still common in many regions of India, “we are about to find out just how dangerous this strain is”, said Om Srivastava, head of infectious diseases at Mumbai’s Jaslok Hospital who also advises India’s worst-hit Maharashtra state.