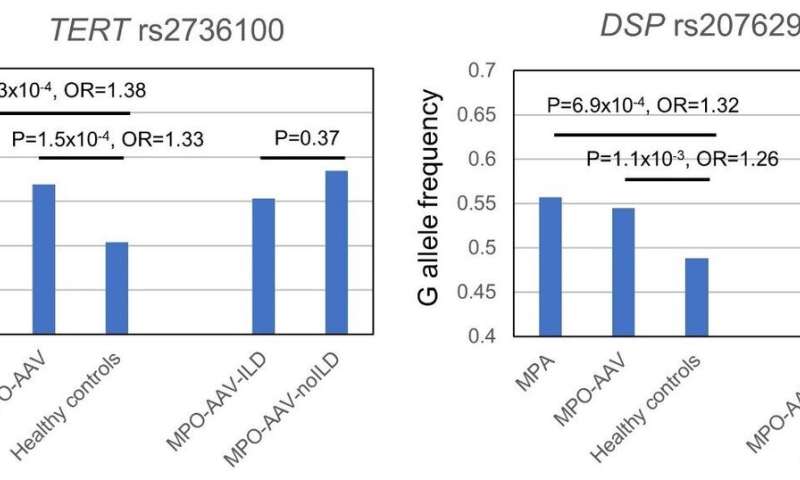 Autoimmune disease is fundamentally a mystery: whyever should an organism systematically set out to harm itself? Now, researchers at the University of Tsukuba have identified a genetic basis for anti-neutrophil cytoplasmic antibody (ANCA)-associated vasculitis, an autoimmune systemic disease that damages organs by targeting small blood vessels in a genetic association study. Interestingly, these specific gene variants, though previously known to increase risk for idiopathic pulmonary fibrosis (IPF), appear to be unassociated with the morbid complication called interstitial lung disease (ILD).

ANCA-associated vasculitis (AAV) is a group of diseases in which neutrophils tag small blood vessels as foreign and attack them throughout the body, causing inflammatory damage. The most affected organs include the kidney and lung, though the reasons underlying this self-inflicted assault remain unclear.

Of the various subtypes of AAV, microscopic polyangiitis (MPA) and myeloperoxidase (MPO)-ANCA positive AAV (MPO-AAV) are more common in Asian populations and more associated with the severe complication AAV-associated ILD (AAV-ILD). Notably, even within the MPA subset, more ILD is seen in Japanese than in Europeans, suggesting a genetic predisposition.

Professor Aya Kawasaki, lead author, clarified the research background. “We had previously reported that a MUC5B gene variant linked to IPF was increased only in AAV patients with ILD. However, its rarity among Japanese made us suspect other IPF susceptibility alleles in TERT and DSP genes.”

The research team classified AAV patients into subsets. MPO-AAV patients were further categorized into those with ILD and those without, based on CT. Genotypes of TERT and DSP were determined for patients and controls, and analyzed. “We found that the frequency of IPF risk alleles TERT and DSP were significantly increased in MPA and MPO-AAV,” explains Professor Kawasaki. “However, the allele frequencies in MPO-AAV were similar regardless of associated ILD. We concluded that TERT and DSP IPF risk alleles were associated with MPA and MPO-AAV irrespective of concomitant ILD, and may be novel susceptibility genes for both AAV subtypes. Additionally, the genetic predisposition for these conditions and IPF may overlap.” (Figure)