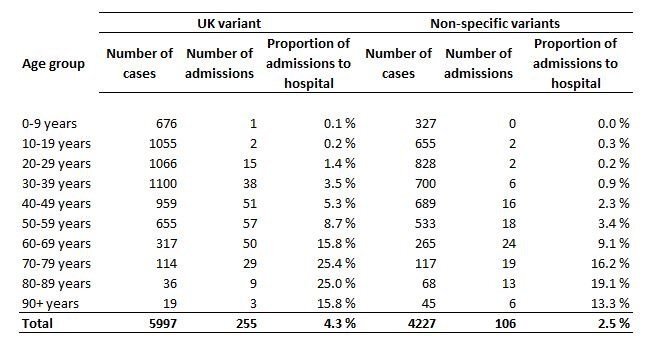 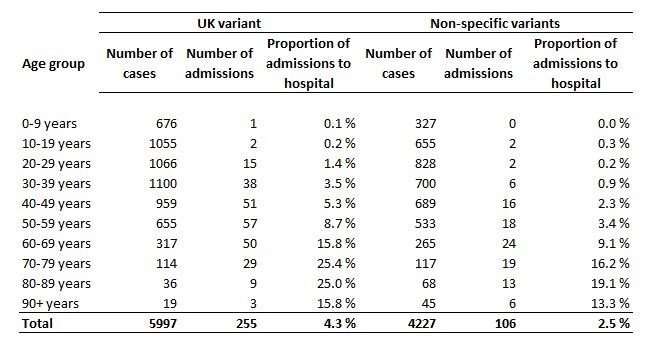 The UK variant of the coronavirus is associated with a higher risk of being admitted to hospital, even among young adults, according to a new study from the Norwegian Institute of Public Health.

The UK variant is now the dominant variant of the SARS-CoV-2 virus in Norway. Researchers at the Norwegian Institute of Public Health have now investigated the association between the UK variant and admission to hospital with COVID-19 in Norway.

Young adults also have a higher risk of hospital admission

“We find that the UK variant is associated with a higher risk of a person with COVID-19 disease being admitted to hospital. This also applies to young adults,” says Line Vold at the Norwegian Institute of Public Health.

The UK variant has been identified as a specific variant.

“After adjusting for age, gender, country of birth, risk status, county and testing date, people infected with the UK variant had a 2.6-fold higher risk of being admitted to hospital with COVID-19 as the main reason for admission, compared with people infected with non-specific variants,” she explains.

In the Norwegian Institute of Public Health’s weekly report for week 10, it was reported that approximately 72 percent of all cases were confirmed/ probably infected with the UK variant. The numbers vary between counties. The UK variant is more contagious than the variant that circulated earlier in the pandemic. Recent published studies suggest that it also increases the risk of severe disease course and death.

In Norway, the number of hospital admissions due to COVID-19 has increased sharply in recent weeks. In week 10, 165 new admissions were reported, which is the highest number in a week since the end of March 2020. A higher proportion of those infected are now admitted to hospital compared to earlier in the pandemic.

The NIPH study includes all new cases tested between 14 December and 7 March. A total of 32 374 cases were analyzed. Of these, 11 154 were examined for variants of concern. 54 percent were the UK variant, 38 percent were a non-specific variant, 8 percent were another specified variant and 0.5 percent were an unknown variant.

The study has not yet been peer-reviewed. It will be sent to a peer review journal.