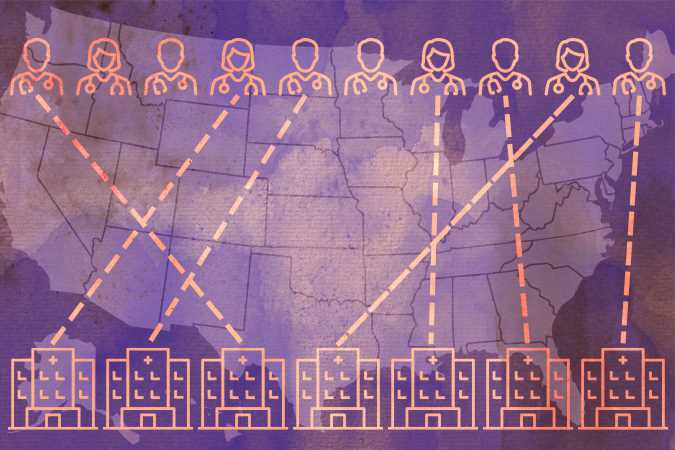 In their last year of medical school, fourth-year students get matched to a hospital where they will serve their residency.

The annual rite of passage is called the National Resident Matching Program. To the students, it’s simply the Match.

Except not every medical student is successful. While tens of thousands do land a residency slot every year, thousands others don’t.

Those “unmatched” students are usually left scrambling to figure out their next steps, since newly graduated doctors who don’t complete a residency program cannot receive their license to practice medicine.

At first glance, two new advocacy groups, Doctors Without Jobs and Unmatched and Unemployed Doctors of America, seem to be championing their cause, helping them find residency slots and lobbying Congress to create more medical residency positions. The groups also recently organized a protest in Washington, D.C., to draw attention to the scarcity of residencies.

The two doctor groups want U.S.-trained and U.S. citizen doctors to get top priority in the Match over foreign-educated doctors. While both Doctors Without Jobs and Unmatched and Unemployed Doctors of America do not say they are anti-immigrant, their websites include messaging that implies foreign doctors are taking residency spots away from U.S. doctors.

However, newly unmatched medical students searching for a source of support aren’t necessarily aware of the groups’ anti-immigrant affiliations.

Haley Canoles, a fourth-year medical student who didn’t match this year, was caught off guard when she learned of the organizations’ deeper agenda.

“I had no idea. I just recently joined Twitter and started following groups that I thought could help me network to find a residency position,” Canoles wrote in a private message on Twitter. “I absolutely do not stand for any anti-immigration agenda.”

As the percentage of unmatched U.S. medical students increases each year and the number of residency positions remains mostly static, more could be drawn to a support group such as Doctors Without Jobs.

According to 2021 data from the National Resident Matching Program, the percentage of medical school graduates who don’t match has increased. In 2021, 7.2% of students didn’t match into residency programs, up from 5.7% in 2017.

That makes advocates for international medical students worry that, if this trend continues, there could be increased resentment toward doctors educated abroad and xenophobic attitudes in the medical community.

Kevin Lynn, executive director of PFIR, founded Doctors Without Jobs as an offshoot of the organization in 2018, after meeting an unmatched doctor outside a protest at the White House.

“I didn’t even know this was a problem, and then we started looking at the data and realizing that thousands of medical students weren’t getting into residency programs,” said Lynn. “At the same time, the number of foreign doctors who graduate from foreign medical schools and get taxpayer-funded residencies is increasing.”

PFIR endorses restricting immigration into the U.S., it says, to protect the American labor force and the environment. Its website also says it researches the “unintended consequences of mass migration.”

In a 2020 report, the SPLC found that Lynn had been closely involved with members of prominent Washington anti-immigration hate groups, including the Federation for American Immigration Reform (FAIR) and the Center for Immigration Studies (CIS). Both organizations push for reducing the number of immigrants in the U.S., are designated as hate groups by the SPLC and were founded by Dr. John Tanton, whom the SPLC has tied to white nationalists, racists and eugenicists.

And in July 2020, at the height of the covid pandemic, Lynn sent a letter to then-Senate Majority Leader Mitch McConnell asking him not to allow a bipartisan bill that would allocate unused green cards to foreign health care workers into the next covid stimulus bill, and instead prioritize unmatched U.S. doctors. That effort was publicized in Breitbart News, a right-wing publication that shares the anti-immigrant view. The bill died in the Senate.

The SPLC also reported that Joe Guzzardi, a writer for Doctors Without Jobs, has previously written more than 700 blog posts for a white nationalist hate website.

According to recent nonprofit filings, from 2015 to 2019 PFIR received almost $2 million in funding from the anti-immigrant Colcom Foundation, which also provides significant funds to FAIR and CIS. Neither Doctors Without Jobs nor Unmatched and Unemployed Doctors of America have made any public financial disclosures, though Doctors Without Jobs accepts donations.

The modus operandi of these types of nativist groups is to take any policy problem area and say the solution is to restrict or eliminate immigration into the U.S., said Eddie Bejarano, a research analyst at SPLC who wrote the 2020 report. Doctors not receiving residency spots is just the latest issue that the anti-immigration movement has seized on.

“They’re taking issues like this and saying that the solution is grounded in nativism, it’s not about reform,” said Bejarano. “It’s out of the textbook for nativists, if they can prey on the fears for normal Americans, such as here, where doctors are just wanting a fair shot at a job and blaming it on immigrants.”

Lynn’s rhetoric doesn’t contradict Bejarano’s observation. “I believe we should be prioritizing Americans,” Lynn said in an interview with KHN. “People say that is xenophobic, that is racist. These are attempts to quiet dissent. What I’m saying are uncomfortable truths.”

Unmatched and Unemployed Doctors of America has a less direct connection to the anti-immigrant groups. It claims it is solely volunteer-run, independent of Doctors Without Jobs and doesn’t receive any funding from the organization. But it does say on its website that it is affiliated with Doctors Without Jobs. The groups have worked together to organize a recent protest and feature each other on their respective websites and in promotional materials.

Leaders of Unmatched and Unemployed Doctors of America declined an interview but provided KHN with an emailed statement claiming nearly half its members are immigrants or are second-generation immigrants.

Doctors Without Jobs and Unmatched and Unemployed Doctors of America have increased their activity in the past couple of months. In January, members of the two groups traveled to Washington to protest outside the headquarters of the Association of American Medical Colleges, to bring attention to the issue of unmatched doctors. The AAMC runs the electronic system for submitting residency program applications.

The groups said they met with members of Congress to discuss reintroducing the Resident Physician Shortage Reduction Act, which would increase federally supported medical residency positions by 2,000 annually for seven years. The bill was introduced again in the House and Senate in March.

Doctors Without Jobs also recently released a video targeting the AAMC and saying that the organization is promoting a policy that “allows foreign medical students to take American students’ residencies.”

In an emailed statement, Karen Fisher, the AAMC’s chief public policy officer, said that any unnecessary restrictions on immigration would only accelerate and worsen the existing physician shortage and that foreign-trained doctors often fill critical gaps in the health care workforce.

“The nation’s teaching hospitals seek to recruit the most qualified candidates into their residency training programs,” said Fisher. “A blanket preference for U.S. applicants runs counter to this goal and would severely restrict the pool of highly qualified individuals and prevent U.S. patients from receiving the best possible care from a diverse and dedicated group of aspiring physicians.”