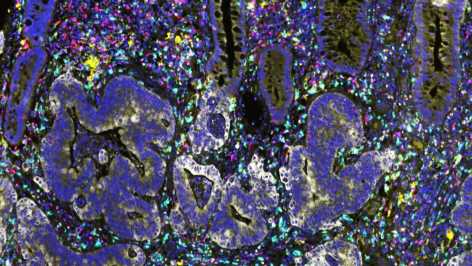 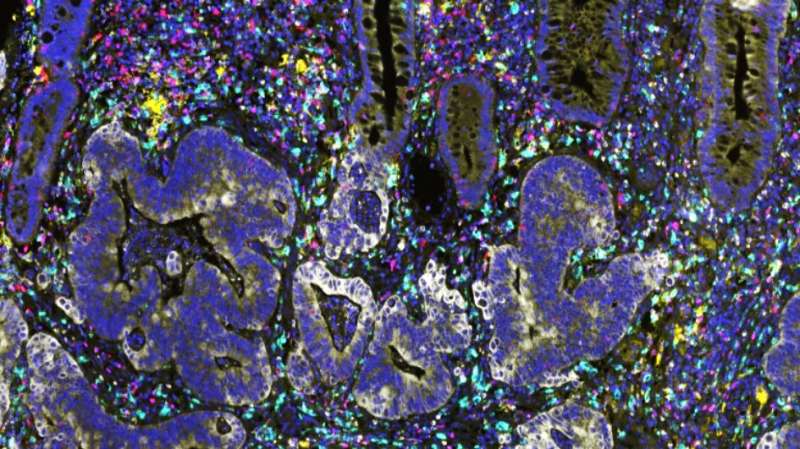 Cancers that are resistant to radiotherapy could be rendered susceptible through treatment with immunotherapy, a new study suggests.

Manipulating bowel cancers based on their “immune landscape” could unlock new ways to treat resistant tumors.

Cancers can evolve resistance to radiotherapy just as they do with drugs.

The new study found that profiling the immune landscape of cancers before therapy could identify patients who are likely to respond to radiotherapy off the bat, and others who might benefit from priming of their tumor with immunotherapy.

Scientists at The Institute of Cancer Research, London, in collaboration with the University of Leeds and The Francis Crick Institute, studied inflammation in bowel tumor samples taken before and after radiotherapy from 53 patients. They aimed to understand how tumor immune activity before and after radiotherapy differs between patients who respond well and those who respond poorly to treatment.

The study is published in the Journal for ImmunoTherapy of Cancer and was supported by the NIHR Biomedical Research Centre at The Royal Marsden NHS Foundation Trust and the ICR, and the Medical Research Council.

The team showed that the effectiveness of radiotherapy partly depends on the level of inflammation within tumors before and after treatment.

In the study, patients who showed a poor response to radiotherapy—with no substantial falls in numbers of tumor cells—started with chronically inflamed tumors, with high levels of activity in 40 immune genes. The level of inflammation within their tumors showed minimal changes following radiotherapy.

In contrast, good responders—who saw a marked drop in the number of tumor cells during radiotherapy—started with a relatively low inflammation tumor landscape which revved up following treatment. Here, there was a significant increase in the activity of 198 immune genes including genes representing immune cells that can directly kill tumor cells.

Careful timing of immunotherapy alongside radiotherapy could unlock resistant cancers

Together, the findings show that carefully timing a combination of immunotherapy and radiotherapy, based on an assessment of the cancer’s immune landscape, could provide a way forward for treating resistant cancers.

Although the study was carried out specifically in bowel cancer the researchers believe the findings could be relevant for other types of the disease too, particularly for cancers where surgery is not an option and radiotherapy is particularly important.

Increasing evidence shows that radiotherapy not only works by causing DNA damage and cell death in cancer cells but also in potentially a similar way to a vaccine—priming the immune system to recognize tumor cells and ramp up an immune response to attack them.

This work is part of growing activity at the ICR and in radiotherapy and immunology which includes the RadNet radiotherapy research network, in collaboration with The Royal Marsden.

Immunotherapy and radiotherapy could prove a highly potent mixture

“Radiotherapy has revolutionized cancer treatment and is the most effective way of curing cancer other than surgery.

“Our study has shown that the immune landscape and levels of inflammation within cancers is crucial to determining how they respond to radiotherapy. It suggests that combining radiotherapy with immunotherapy could prove a highly potent mixture—improving our ability to eliminate hard-to-treat cancers further still.

“Now we want to improve our understanding of how to combine and sequence radiotherapy and immunotherapy together to maximize the treatment response for the individual biology of each patient.”

“Radiotherapy is an important curative treatment option for many patients with cancer. We are starting to understand how the immune response is important for radiotherapy to work most effectively.

“Our study suggests that by targeting specific non-cancer cells that block this immune response we can further improve radiotherapy responses in patients.”

“Radiotherapy is commonly used in patients with rectal cancer and there are currently no validated biomarkers that reliably predict how well the cancer will respond. Patients who do not respond well to radiotherapy may still experience significant side effects despite no clinical benefit.

“This study suggests that we can potentially improve the response in these patients through modulation of the immune system, which is a very exciting development. The study also showed that a novel technique developed at the University of Leeds, tumor cell density, can be used to objectively measure the degree of tumor response to radiotherapy.”

Tuning the radiotherapy response through immunotherapy

“This fascinating study adds to the evidence that the effectiveness of radiotherapy is closely intertwined with the involvement of the immune system. It’s now clear that the radiotherapy response in cancer cells and surrounding tissues can empower a patient’s own immune system to recognize and destroy their tumor.