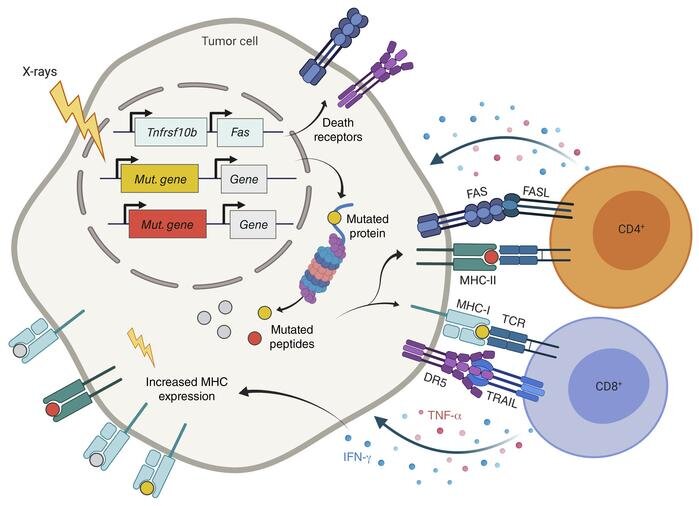 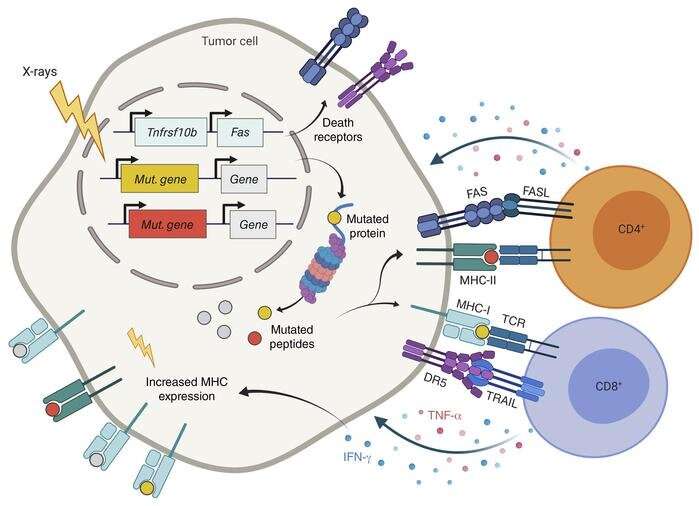 Radiation therapy appears to increase the expression of genes with mutations that induce an immune response to malignant cells, according to preclinical research by Weill Cornell Medicine and NewYork-Presbyterian investigators. The findings suggest that radiation treatment directed to tumors in mice may help to improve a form of immunotherapy that currently has limited effectiveness.

The immune system is prompted to attack a foreign invader or an unhealthy cell when it is presented with a fragment of a protein, called an antigen, from the threatening pathogen or cell. In cancer cells, antigens are derived from the abnormal proteins encoded by mutant genes. One strategy to treat cancer is to develop a vaccine made with parts of an antigen that the immune system hasn’t seen before, called neoepitopes, to stimulate T cells, a type of immune cell.

Notably, previous cancer studies in mice and humans have shown that neoepitope vaccines alone can initiate a T cell response, but they do not result in robust anti-tumor activity. One reason may be that the neoepitopes are not presented to T cells because they are derived from proteins that cancer cells expressed at insufficient levels.

Demaria and her colleagues became interested in testing if radiation can unmask cancer antigens following an observation in a clinical trial led by co-author Dr. Silvia Formenti, the Sandra and Edward Meyer Professor of Cancer Research and chair of the Department of Radiation Oncology at Weill Cornell Medicine, and radiation oncologist-in-chief at NewYork-Presbyterian/Weill Cornell Medical Center, the results of which were published in a 2018 paper in Nature Medicine.

Analysis of the anti-tumor T cell response in a patient with metastatic lung cancer who experienced a complete response to radiation therapy and immunotherapy revealed a rapid and sustained expansion of T cells recognizing a neoepitope derived from an aberrant protein encoded by a gene upregulated by radiation therapy.

To better understand this correlation, Demaria and her research team, with the help of collaborators Dr. Laura Santambrogio, professor of radiation oncology and associate director for precision immunology at the Englander Institute for Precision Medicine at Weill Cornell Medicine, and Dr. Lorenzo Galluzzi, assistant professor of cell biology in radiation oncology at Weill Cornell Medicine, conducted the current study in a mouse model of triple negative breast cancer. This cancer model contains a number of gene mutations similar to the metastatic lung cancer patient.

“We conducted a proof of principle study in which we brought our observations back to the bench to test mechanism of action,” said Demaria, who is also a member of the Sandra and Edward Meyer Cancer Center, along with Santambrogio and Galluzzi.

The researchers identified three immunogenic mutations that were upregulated in expression by radiation and recognized by T cells. Of these, two were recognized by CD8 T cells and one by CD4 T cells. Most solid tumors are only recognized by CD8 T cells, which are thought to be responsible for destroying tumors. Unexpectedly, the researchers found that radiation made the cancer cells recognizable also by the neoepitope-specific CD4 T cells that contributed to their elimination. Moreover, the radiation-induced expression of death receptors further contributed to making the malignant cells easier to kill by T cells.

When mice were vaccinated with the three identified neoepitopes, the therapeutic effect of radiation on the primary tumor was enhanced, and lung metastases were controlled as well, suggesting that such a strategy could be applied in the neoadjuvant treatment of tumors to curtail the spread/growth of the metastases.

“Radiation therapy helps cancer cells become more visible to the immune system and works in concert with a personalized vaccine directed against mutations specific for a given patient tumor,” Demaria said.

The team is now looking to define common sets of genes that are upregulated after radiation in human tumors. “With a tumor biopsy and genetic sequencing, we should be able to determine whether or not immunogenic mutations are expressed and at what levels, and then we can predict whether radiation therapy can unmask these mutations,” said Demaria.