In a groundbreaking experiment, scientists hooked up a genetically modified pig kidney to a human patient and watched as the organ successfully filtered waste from the person’s body.

The experiment was conducted in a brain-dead patient who was a registered organ donor and whose family granted permission for the procedure to be done, The New York Times reported. During the 54-hour experiment, the kidney remained outside the patient’s body where the surgeons could observe the organ and take tissue samples. Although the kidney wasn’t implanted inside the body, the procedure still allowed the team to see whether the organ would be immediately rejected; problems with animal-to-human transplants typically develop where the human blood interfaces with the animal tissue, such as in the blood vessels, experts told the Times.

Compared with primate organs, pig organs offer a number of advantages for transplantation. For example, pigs are already raised for food, produce large litters within a short gestation period and grow strikingly similar organs to humans’, The Associated Press (AP) reported. But there’s one major hurdle: Pig tissues carry a gene that codes for a sugar molecule called alpha-gal, which can send the human immune system into a frenzy and lead to organ rejection. (In people with a rare red meat allergy, alpha-gal can trigger life-threatening allergic reactions, Live Science previously reported.)

So in the transplant experiment, conducted last month, the team used a kidney from a genetically engineered pig that lacked this sugar-producing gene. And as an extra line of defense, the surgeons also transplanted the pig’s thymus, a small organ that produces immune cells, into the human patient, to reduce the odds that the body would reject the pig kidney, according to the Times.

And for the duration of the experiment, the kidney functioned perfectly.

“It had absolutely normal function,” Dr. Robert Montgomery, who led the surgical team at NYU Langone Health, told the AP. As soon as it was attached to blood vessels in the patient’s upper leg, the pig kidney began producing urine and filtering creatine, a waste product of muscle cell function, from the blood. “It didn’t have this immediate rejection that we have worried about.”

Given the promising results, the experiment could represent a big step forward for xenotransplants — transplants from animals to humans — but many questions remain.

“We need to know more about the longevity of the organ,” Dr. Dorry Segev, a professor of transplant surgery at the Johns Hopkins School of Medicine who was not involved in the research, told the Times. Kidney rejection can occur long after a transplant “even when you’re not trying to cross species barriers,” so the durability of pig-to-human transplants will need to be carefully assessed, Dr. David Klassen, chief medical officer of the United Network for Organ Sharing, told the Times.

But if and when pig-to-human transplants can be cleared for wider use, “it’s truly mind-boggling to think of how many transplants we might be able to offer,” Dr. Amy Friedman, a former transplant surgeon and chief medical officer of LiveOnNY, a New York-based organ procurement organization, told the Times. Last year, 23,401 U.S. residents received kidney transplants, and currently, 90,240 Americans are on a waitlist for a kidney, the Times reported. Many patients with kidney failure can’t qualify to get on a list, in part, due to the scarcity of available kidneys.

Pig kidneys could potentially make transplants available to many more people, but “you’d have to breed the pigs, of course,” Friedman said.

Revivicor, a subsidiary of United Therapeutics, developed the genetically modified pig used in the recent transplant; the company’s so-called GalSafe pigs were cleared for medical use and consumption by the U.S. Food and Drug Administration last year, the AP reported in December 2020. Revivicor has no immediate plans to sell the pigs as food, but the product could potentially be appealing to those with alpha-gal allergies, for instance.

In the future, the gene editing tool CRISPR could also make pig organ transplants safer, Live Science previously reported. Meanwhile, some labs are taking a very different approach to the transplant problem: growing human tissues and organs inside pigs so that they can later be harvested for transplants. In theory, because the organs would be made of human cells, they’d be less prone to rejection. However, the development of such human-pig chimeras is still in its early days and raises a number of ethical concerns.

Read more about the transplant experiment in The New York Times and The Associated Press.

Nicoletta Lanese is a staff writer for Live Science covering health and medicine, along with an assortment of biology, animal, environment and climate stories. She holds degrees in neuroscience and dance from the University of Florida and a graduate certificate in science communication from the University of California, Santa Cruz. Her work has appeared in The Scientist Magazine, Science News, The San Jose Mercury News and Mongabay, among other outlets. 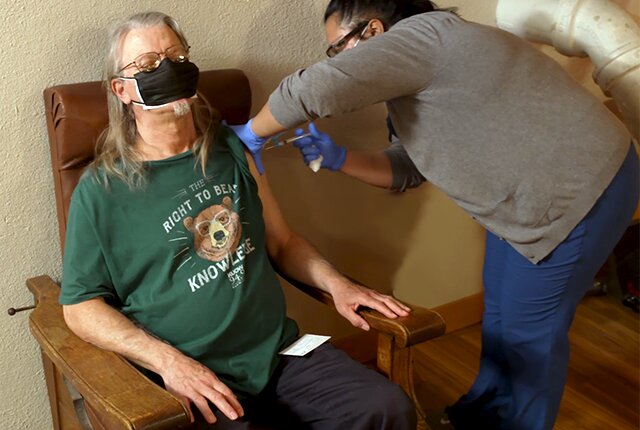