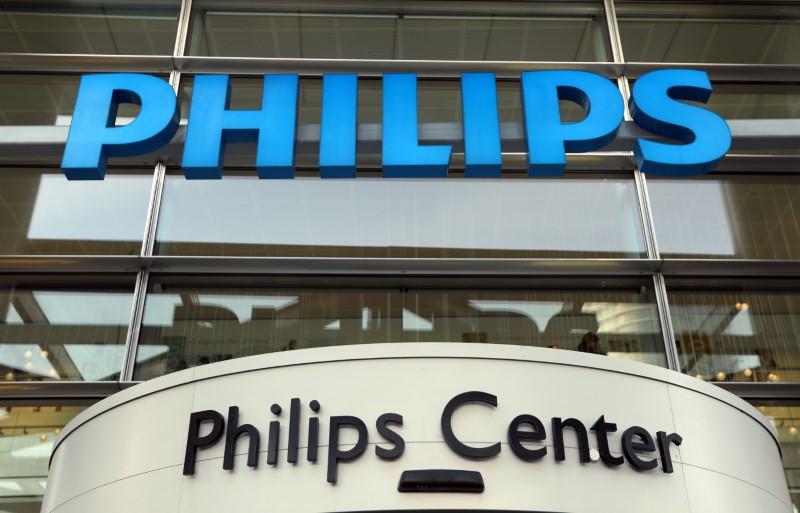 AMSTERDAM (Reuters) -Philips, the Dutch medical equipment company, said on Monday it would recall some “CPAP” breathing devices and ventilators globally because of a foam part that might degrade and become toxic.

When it degrades, the polyurethane foam used in sound-reduction foam on the devices can release toxic particles or gas, which in the worst case could cause cancer, the company said in a statement announcing the recall.

Philips said that though the matter would cause “revenue headwinds” in its sleep and respiratory care division, that would be compensated by strength in other businesses. It took a new 250 million euro ($303 million) provision but left its full year financial guidance of “low-to-mid-single-digit” comparable sales growth unchanged.

CEO Frans van Houten said Philips is the largest maker of such machines, and between three and four million affected sleep apnea machines and ventilators would be recalled.

“We’re going to put all our capacity to focus entirely on replacing and repairing these units,” he said in a call. He said the process would likely take a year.

That “has a consequence that we will not be able to serve new customers, so there’s going to be a shortage in the field.”

Philips had first disclosed the issue, for which it then also took a 250 million euro charge, in its first quarter-earnings report in April, bringing the total cost of the problem to 500 million euros to date.

The company’s guidance is for users of the CPAP machines, which help people with sleep apnea, to halt usage. Around two-thirds of Philips CPAP machines are sold in the United States.

Doctors with patients using life-sustaining ventilators should first consider whether the potential danger from the foam outweighs other risks, Philips said.

The degrading foam, which is used to dampen the machines’ sound, can turn into small, inhaled particles, irritating airways and potentially causing cancer, Philips said. Gasses released by the degrading foam may also be toxic or carry cancer risks.

Philips spokesman Steve Klink said the company was working with health authorities on a safe replacement for the foam, but must first clear testing and regulatory hurdles.

In April, Philips said first quarter core earnings surged 74% in the first quarter to 362 million euros ($438 million), compared with the same period a year earlier, on a 9% rise in comparable sales.