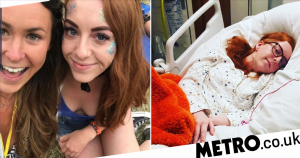 Charlotte Warhurst was on the phone to a friend when she suddenly developed a pain in her head like nothing she’d ever experienced before.

Her friend heard her slur her words and Charlotte got help from her mum Pat.

A healthy 21-year-old, she had no idea what was happening but her mum, who works as a children’s nurse, knew there was something seriously wrong.

She was rushed to hospital from her home in the Wirral, Merseyside, and a CT scan showed that a brain aneurysm had burst causing a bleed on her brain.

A brain aneurysm is where there is a bulge in a blood vessel caused by a weakness. Sometimes the pressure becomes too much and this bulge bursts.

Charlotte was quickly moved to The Walton Centre hospital in Liverpool for specialist treatment and taken to surgery so they could coil the aneurysm, meaning the vessel is filled with tiny metal coils to stop it bleeding.

Luckily the treatment was successful but in recovery, Charlotte was told the news that she had another aneurysm, and there was a chance it could burst like this one, though it may be worse.

Doctors offered her more surgery or told her they could monitor it.

For eight years, Charlotte lived with the aneurysm in her head and she admits it caused her a lot of anxiety during that time.

‘I knew that if it ruptured, there was a possibility I might not survive this time. It was frightening and a lot to deal with.

‘I would just be doing normal things like driving and think “what if it happened now?”

‘I would get headaches quite often after the first aneurysm and every time I would be so scared it was happening again.

‘It massively impacted my day-to-day life.’

In 2019, Charlotte decided she could no longer live with the ‘ticking time bomb’.

She was now a qualified nurse, engaged to her partner Joel and planning her dream wedding.

Symptoms of a ruptured brain aneurysm

She says: ‘We were thinking about the future and knew we wanted a family some day. I heard that child birth can cause an aneurysm to rupture. At that stage I didn’t want to have to worry about it any more and decided to have the surgery.’

Charlotte was told of the risks of the surgery before agreeing but wanted to go ahead.

On 2 September last year, she went into theatre to have a similar procedure to before, where they would coil the first aneurysm.

Sadly, the surgery went wrong and Charlotte woke up five weeks later, unable to move the left side of her body.

She says: ‘I went into the surgery and then my life changed forever.

‘The aneurysm ruptured while they were trying to coil it and I had a catastrophic bleed on the brain.

‘I was on blood thinners to stop a stroke but it meant there was more bleeding.

‘I had to have an emergency craniotomy, where a piece of the skull is removed to relieve the pressure and then I was put in an induced coma for five weeks to recover.’

The bleed had caused brain damage and left her paralysed down her left side. She also couldn’t talk, couldn’t swallow and lost her peripheral vision on both sides.

‘It was scary when I woke up. It took me a while to realise the severity of it. The days after I woke up there were speech and language therapists and physios and they were talking to me about rehab.’

In the months after she had to slowly learn how to do things again and was in rehab units right up until the outbreak of coronavirus.

Due to the situation, they decided she would be better off at home

She says: ‘Initially I was able to talk again and eat and drink quite quickly. I have been so determined to get better. I might never get back to the person I was before but I want to get my independence back.

‘I am determined to walk again and I am doing well. I was able to walk with a stick for the first time a few weeks ago. It was only a few metres but it was something. My left side is still paralysed but I have learned to compensate and step in a way that is safe for me.

‘I’m now at home and my physio is still coming out to me every week. At first, it was hard but I have come on well because I have had to cope with things around the home. It’s nice to be in your own environment.’

Now, Charlotte and Joel have put their wedding on hold as their house is not suitable for her long-term needs and they want to sell the house to find something that is easier for her.

Charlotte adds: ‘The house is so important and the wedding will happen after that. I want to keep working to be able to walk down the aisle on my big day as well.’

She and her family have been supported by Headway, the brain injury charity and she is keen to raise awareness of the work that they do.

Charlotte is also posting about her recovery and rehabilitation on Instagram @charls_story.

Get in touch at [email protected]