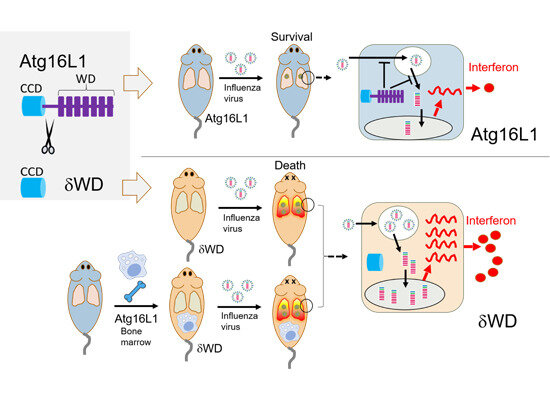 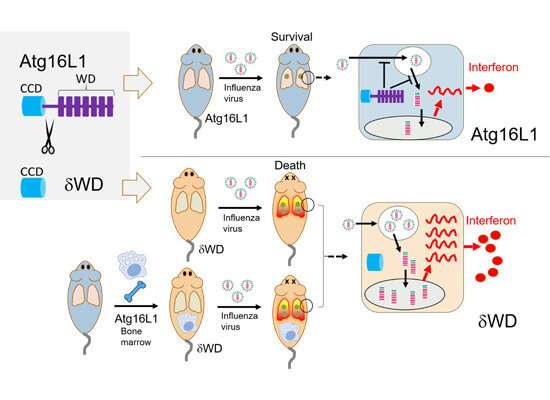 Researchers have uncovered a previously unknown arm of the immune defense system that protects the lung from lethal viral infections.

Respiratory diseases caused by viruses such as influenza A and SARS-CoV-2 cause damage not just through their own actions, but also from collateral damage as the immune system reacts to fight the infection.

A timely and proportionate response identifies viruses, isolating them in tiny vesicles called phagosomes that are then targeted for breakdown. This processalso triggers production of cytokines to alert the immune system.

Cytokine responses represent a fine balancing act that can sometimes tip over to an excessive state known as the cytokine storm. This has serious consequences for viral lung infections, as it leads to inflammation, fluid building up in the lungs and eventually death.

Given the impact of respiratory conditions, brought into sharp focus by the COVID-19 pandemic, there’s a clear need to fully understand the complexities of this immune response to develop better treatments or targets for drugs that can protect against infections taking hold.

To address this teams from the Quadram Institute and universities of Liverpool, East Anglia (UEA), and Bristol have worked together to studythe immune response to influenza A virus infection in the lungs of mice. Animal models provide a way of understanding how the immune system works, and as with SARS-CoV-2, animals may be a significant reservoir for viruses that, if transferred to humans, can trigger pandemics.

Funded by the Biotechnology and Biological Sciences Research Council, they focussed on a recently characterized form of non-canonical autophagy called LC3-associated phagocytosis (LAP) that recognizes pathogens as they enter cells.

Professor Tom Wileman at the Quadram Institute has worked with Dr. Penny Powell and Professor Ulrike Mayer at UEA to develop a LAP-deficient mouse to study viral infection. Unique to this study, the mice were designed to retain the normal autophagy machinery, and target LAP within immune cells, so are the best available option for understanding the precise role of this newly uncovered immune defense.

Prof James Stewart at the University of Liverpool characterized the function of LAP by infecting the transgenic mice with influenza virus and studying the response to infection.

The mice were found to be much more susceptible to the virus, with it triggering a cytokine storm leading to pneumonia. The researchers showed that LAP prevented a lethal cytokine storm by supressing lung inflammation.

So where does this protection come from? Dr. Yohei Yamauchi and colleagues from the University of Bristol provided the answer by looking at the cells lining the surface of the lung. There was no difference in how the virus initially binds to these cells, but they did see that non-canonical autophagy/LAP did slow the way the virus enters the cell. It may work by preventing the virus fusing with endosomes, which are the cell’s way of importing materials from outside.

Non-canonical autophagy/LAP is likely to be important as a first defense against infection, where there is no immunity from previous infections, especially in the specific case of influenza and SARS-CoV-2.

“Being able to describe this novel part of the immune defense system against respiratory infections in very exciting, especially given the current pandemic,” commented Professor Tom Wileman from the University of East Anglia and Quadram Institute.