A man needed surgery to rebuild his penis after he was bitten by a cobra while on the toilet during a safari trip in South Africa.

The 47-year-old Dutch man went to use the toilet while visiting an unnamed nature reserve in the country.

While on the toilet, the man was bitten by a highly venomous snouted cobra hidden inside the bowl itself.

The unidentified man had to wait three hours for emergency helicopter transport to the nearest hospital, which was nearly 220 miles (350km) away. 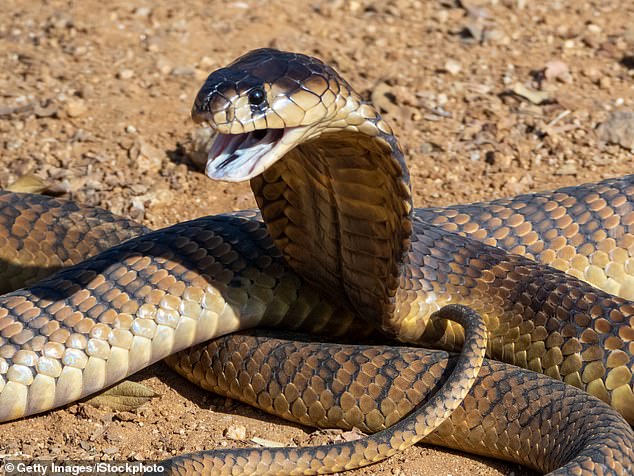 In that time he felt a deep burning sensation in his genitals, which began to swell and turn purple, a sign of scrotal necrosis or ‘flesh eating disease’.

Experts who reported the case in Urology Case Reports said the man has the unfortunate honour of being the first medical case of snouted cobra envenomation of the genitals.

The man was provided emergency treatment in South Africa but a serious amount of the tissue in his penis was unrecoverable and had to be cut away.

Nine days later the Dutch national was repatriated to the Netherlands where even more dead penis tissue had to be removed.

Dutch surgeons then set about rebuilding his penis using a graft of tissue they took from his groin to replace the dead tissue lost from the snake bite.

They provided something of cheeky message in their comments of the case, giving some advice for those heading into tropics.

‘Always flush the toilet before sitting down in countries notorious for their snake population!’ they wrote.

Necrosis, commonly referred to as the ‘flesh eating disease’ is a potentially deadly condition caused by bacteria infecting the tissue beneath the skin, and the surrounding tissue.

The bacteria do not actually ‘eat’ the flesh, but the toxins they release damage nearby tissue.

One year after the incident the man had reportedly recovered both the full function and sensation in his penis.

The snouted cobra, the species of snake that bit the man, and its venom, are not well understood, as the creature was only discovered in 2009.

However, the medics who reported the case said the presence of a kidney injury in the Dutch man is indicative of the type of toxins found in the snouted cobra’s venom.

This makes it quite unusual in terms of cobra species, the authors noted.

The medics added that snake bites are usually occur on people’s extremities, with bites on the genitals relatively rare.

There are only three native species of snake in the UK of which only one, the adder, is venomous

On average there are 100 adder bites to people in the UK each year, according to the group Amphibian and Reptile Conservation.

However these are rarely ever fatal, with only 14 recorded deaths from adder bites since 1876, with the last being in 1975.

But people who are bitten by an adder, or are with someone who has been bitten, are still advised to call 999.

Additionally, a number of venomous snake species are for sale as pets in the UK.

In the US snake bites are far more common, with an average of 7,000 to 8,000 people getting bitten a year, with about five of these being fatal, according to the American Center for Disease Control and Prevention. 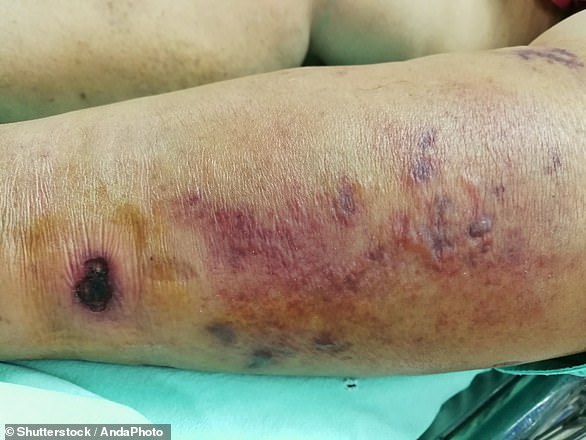 The above stock photo shows a leg infected with necrotizing fasciitis

Necrotizing fasciitis, more commonly known as ‘flesh-eating disease’, is a rare but extremely vicious bacterial infection. ‘Necrotizing’ refers to something that causes body tissue to die, and the infection can destroy skin, muscles and fat.

The disease develops when the bacteria enters the body, often through a minor cut or scrape. As the bacteria multiply, they release toxins that kill tissue and cut off blood flow to the area.

Because it is so virulent, the bacteria spreads rapidly throughout the body.

Sufferers must be treated immediately to prevent death, and are usually given powerful antibiotics and surgery to remove dead tissue. Amputation can become necessary if the disease spreads through an arm or leg.

Patients may undergo skin grafts after the infection has cleared up, to help the healing process or for aesthetic reasons. 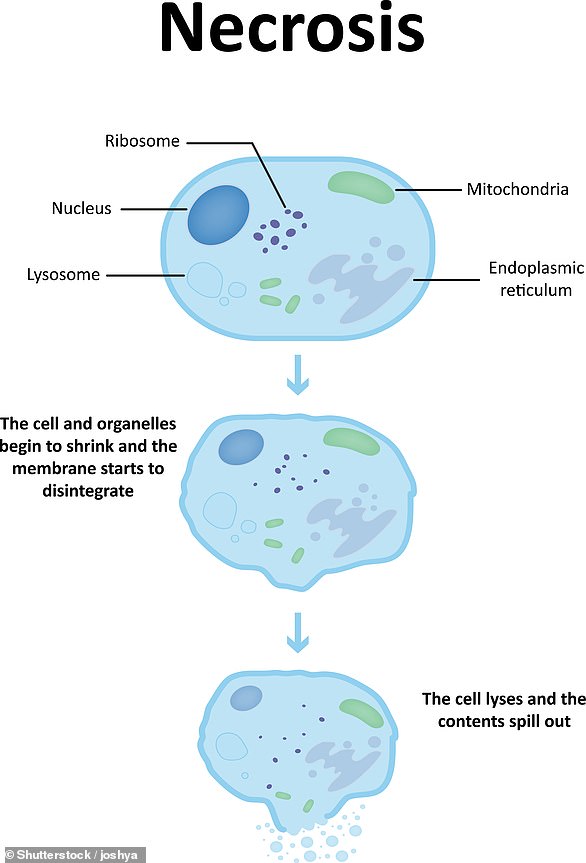 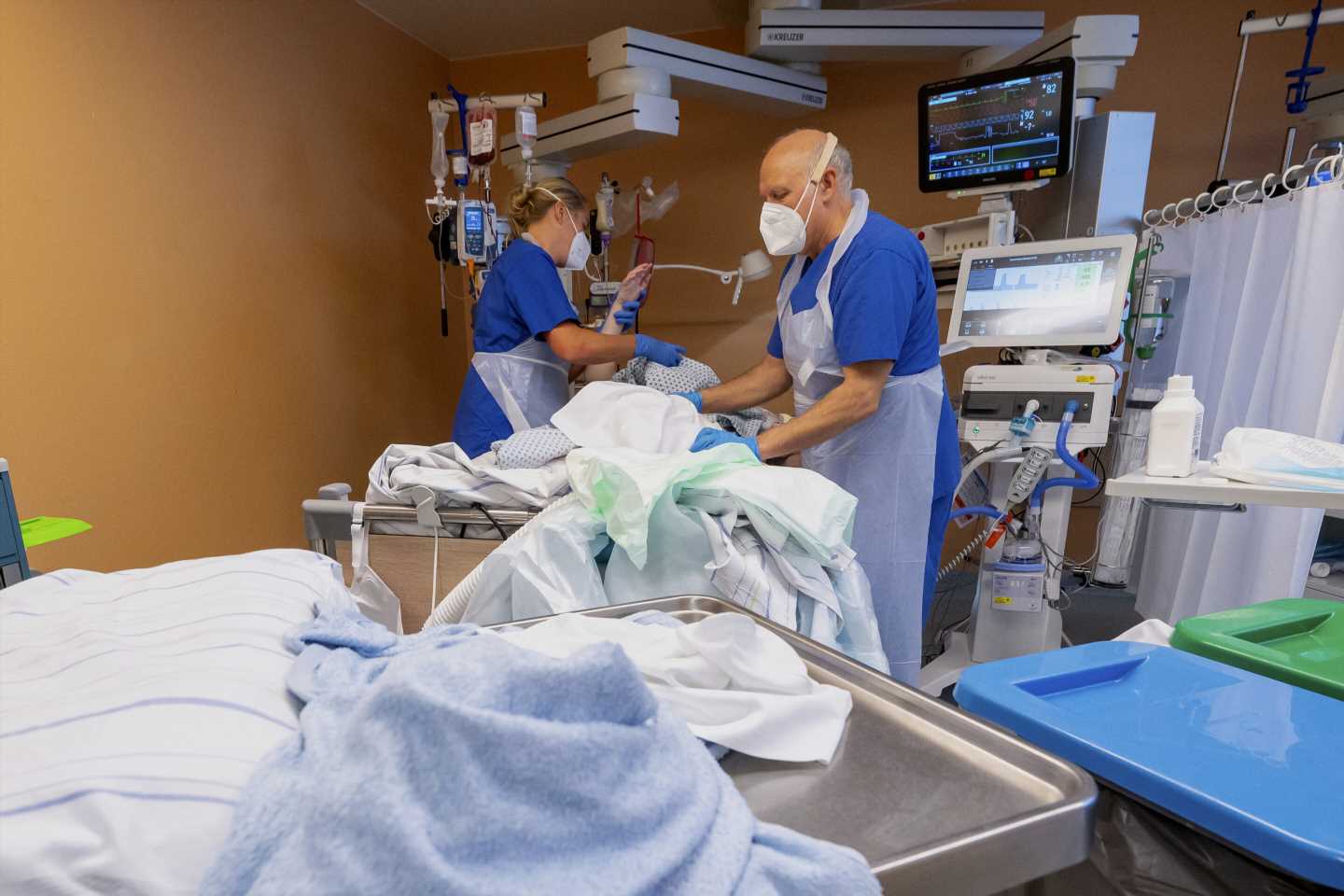 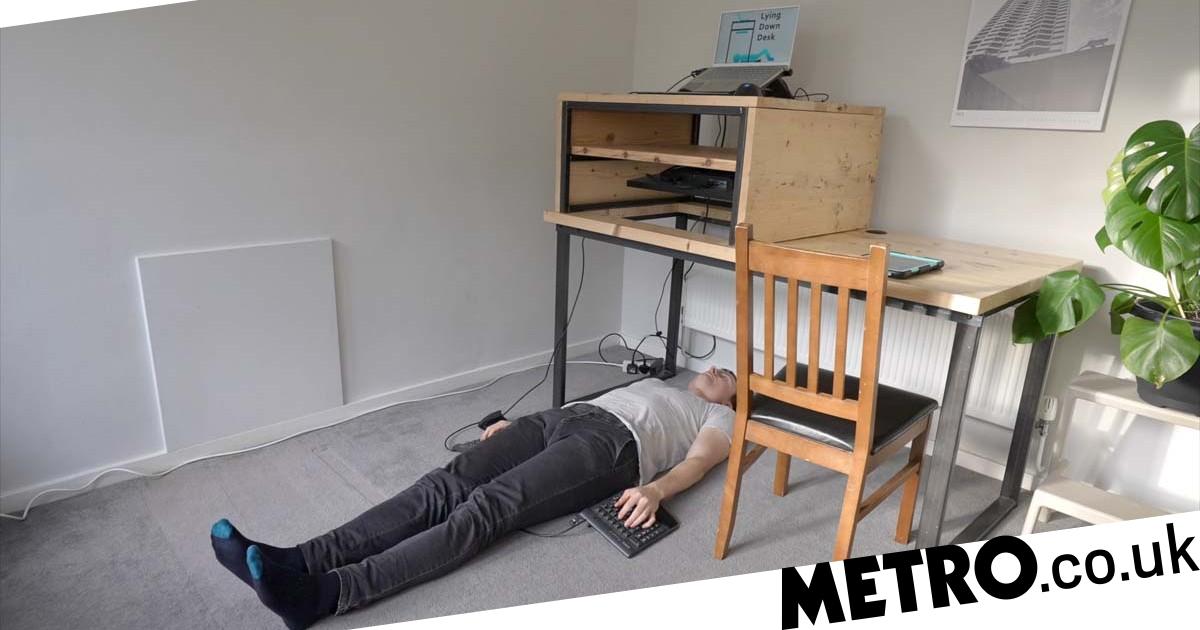