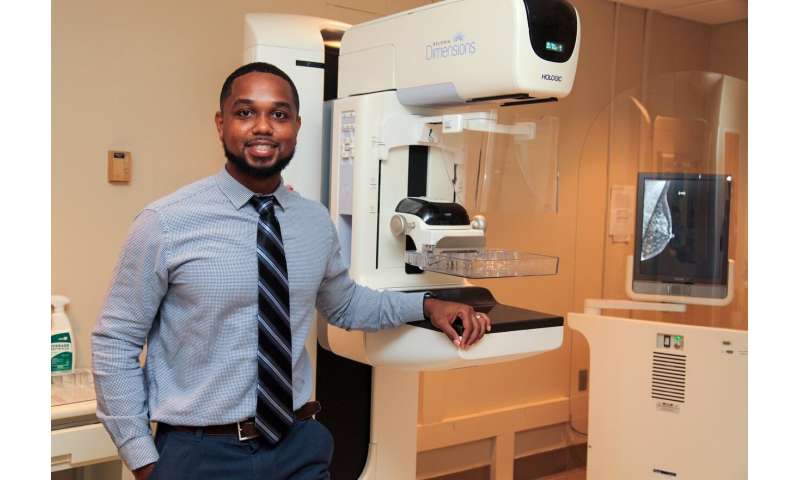 A young cancer epidemiologist who has already helped identify hotspots for geographic, racial and ethnic disparities in breast cancer mortality in the United States, is now looking at mammography screening rates in those hotspots.

Identifying the hotspots, combined with personal insight from some of the women there about barriers to screening, will enable better targeting of women most at risk of dying from this common, largely treatable cancer, says Dr. Justin Xavier Moore, cancer epidemiologist in the Department of Population Health Sciences at the Medical College of Georgia at Augusta University.

While Black and white women get breast cancer at about the same rate, Black women have a higher rate of death from breast cancer, according to the Centers for Disease Control and Prevention. Black and Hispanic women are 20% more likely to be diagnosed with advanced stage breast cancer, and they have, respectively, up to 70% and 14% increased risk of death, Moore says.

“If we know that people are getting later diagnoses, if we know these data for the last 20 years, then we need to do something about making sure people get in a little earlier and are screened better so we can try to mitigate the burden before it is too far downstream,” Moore says.

Moore has received a $646,332 Mentored Research Scientist Career Development Award, or K01 Award, from the National Institute on Minority Health and Health Disparities to enable him to find these women by looking at race specific estimates of mammography screening.

“We know these are problem areas in terms of people dying, but I want to know if they align with access to screening. Screening is always important,” Moore says, and mammography is one of the most definitive breast cancer screening tools. But while mammography may be free and even mobile sometimes, access is more multifactorial.

Living in areas of high racial segregation and decreased access to mammography is known to significantly increase the risk of late stage breast cancer, Moore says. Meanwhile screening mammography is associated with at least a 20% reduction in breast cancer mortality. But there is little geospatial (data associated with a specific location) information on mammography screening by race. But it is known that both Black and Hispanic women are less likely than white women to receive adequate mammography screening, including at the recommended ages, and there tend to be longer time intervals between screenings and lack of timely follow-up to a suspicious finding, Moore says.

Moore and his colleagues published in June 2018 in the journal Cancer Causes & Control the study looking at geographic, racial and ethnic variations in breast cancer mortality and whether differences they found could be explained by the characteristics of the counties they lived in.

“The incidence may not be that different among Black and white women but the death rate differences are dramatic,” Moore says of geospatial mapping that showed groupings of higher death rates primarily in the Southern portion of the country.

“If you are Black, your health is predicted to be poorer,” Moore says. “If you are Black and rural, which is what we are seeing with COVID-19, it’s even more exponentiated.” It’s what is called an interaction or multiplicative effect in epidemiology, he says. “You compound it because you are in both the risk groups.”

Problems like inadequate screening and a disconnect of services also likely are factors in these high mortality hotspots, Moore says, like in his home state of Georgia where the contiguous counties of Putnam, Morgan and Jasper are among the top 1% of hotspots in the nation.

“That is problematic,” he says. “The thing you want to do is bring services to people and meet them where they are, geographically, and in how you approach them to break down barriers and build trust,” Moore says. Much like targeted cancer treatment, the work he is doing should provide insight on what issues and approaches need to be targeted to enable Black and Hispanic women to feel comfortable seeking the screening and care they need. He reasons that fear and distrust are likely factors, which he will ask the women about. “If we don’t know your risk then you don’t have an opportunity to mitigate the burden,” he says.

After the initial intensive number crunching and mapping, Moore will be gaining additional insight from the affected woman in the latter years of the new grant. He plans to survey 200 women from the high-risk counties identified to ask about personal, interpersonal and community barriers as well as facilitators for screening mammography. Then, he will sit down with about 40 of these women in the beauty salons and churches in their communities to gain additional understanding.

“We might find things that I would not think about as a cancer disparities researcher,” Moore says. These might include related issues like the struggles of living paycheck to paycheck, and perhaps newer factors like trying to help four children continue their education at home in the midst of a pandemic.

He hopes the insight this study will enable will springboard into a larger community-based participatory research program that will recruit thousands of women from these hotspots and focus on early screening and detection, healthy lifestyle intervention, and otherwise trying to mitigate the heavy breast cancer burden these women bear.

The hotspots for low screening will be identified by combining data from the National Health Interview Survey, which has more than 60 years of data on a broad range of health topics obtained through personal interviews, and the Behavioral Risk Factor Surveillance System, which collects state data related to risk behaviors, chronic health conditions and use of preventive services. Together the datasets will provide what Moore calls the Breast Cancer Disparity, or BCAD, Index, which will enable ranking of individual counties with the highest concerns about breast cancer among minority women.

The United States, including the District of Columbia, has 3,141 counties and county equivalents and for the mortality rate study the investigators looked at 3,108 contiguous counties from 2000-15. They identified 119 counties mostly in the Southern region of the country, including clusters in the Mississippi Valley River region, coastal Carolinas and the three Georgia counties of Putnam, Jasper and Morgan clustered in the middle of the state, as hotspots for breast cancer deaths in Black women. The 83 hotspots for Hispanic women were primarily in the Southwest, including the southern-most tip of Texas, a big block that covered much of the western portion of New Mexico, the southern portion of Arizona, as well as a swath of Florida, primarily along the Atlantic coastline.

The high death rates correlated with lower education levels and household income, higher unemployment and uninsured residents, and a higher proportion of individuals who indicated that cost was a barrier to medical care.

At that time, Moore could not find a national picture of rates of minority mammography screening. He expects, now that he is looking, once he merges findings on both, to find overlap with death rate hotspots, but low-screening regions need to be objectively identified.

When the investigators looked at only white women, they didn’t see similar clustering, which is good, Moore says, but indicates you can’t use geography as a determinant of their breast cancer mortality. White women have a five-year survival rate of about 91%.

Dr. Steven S. Coughlin, interim chief of the Division of Epidemiology in the MCG Department of Population Health Sciences, is Moore’s primary mentor on the new project.

His community based approach in the study will mirror the barbershop tours he experienced working with established service organizations like 100 Black Men of St. Louis, where they would provide standard health checks like blood pressure and glucose levels, as they learned more about the community’s health needs. “The beauty of those barbershop tours is you are getting feedback,” Moore says. He volunteered with the St. Louis group while doing his postdoctoral training in cancer prevention and control at Washington University, right before joining the MCG faculty in 2019. Now he is a volunteer with 100 Black Men of Augusta. 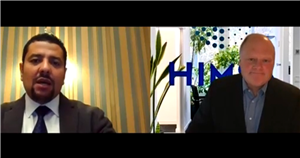 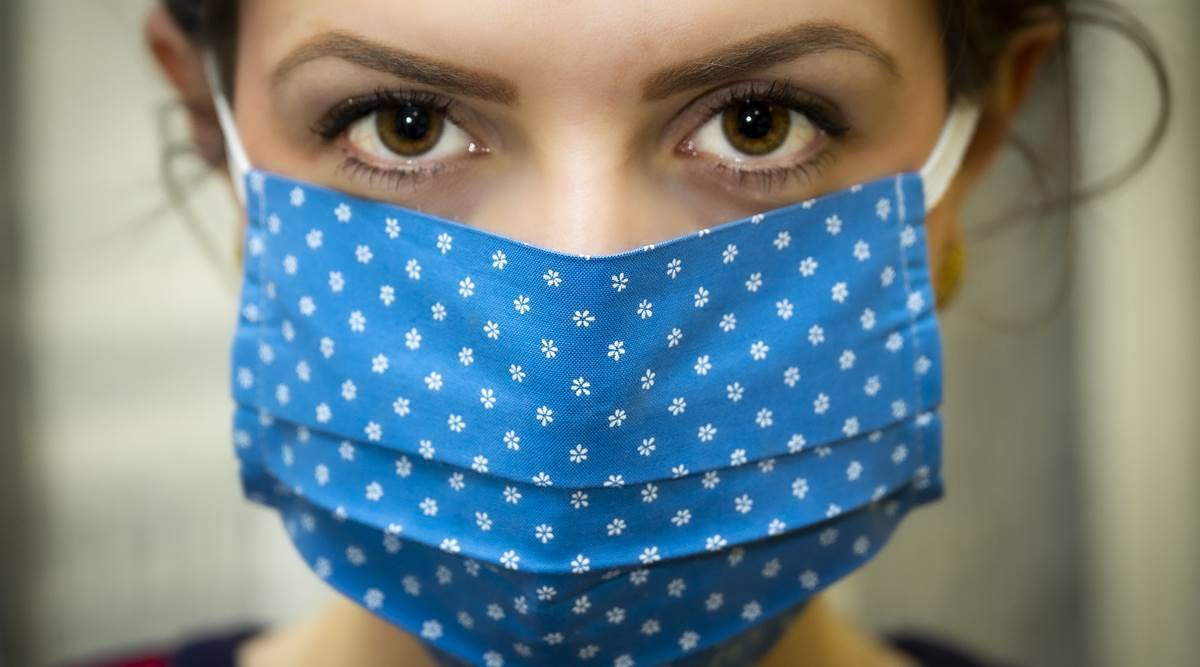 Next post Watch out! Pandemic fatigue can catch you off-guard