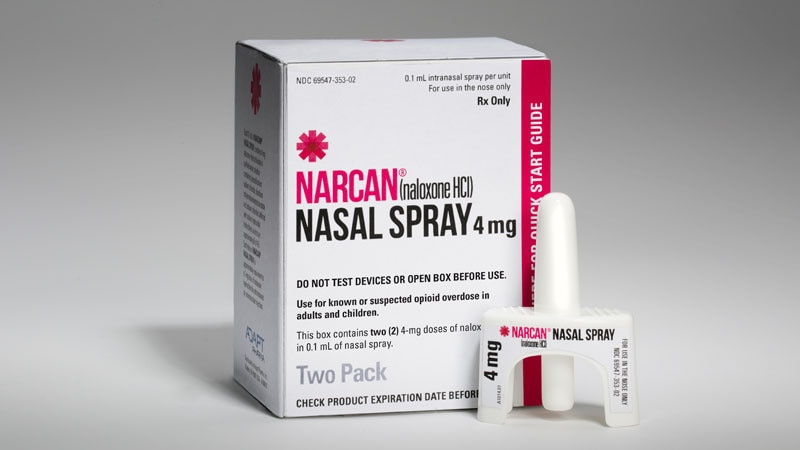 The US Food and Drug Administration (FDA) has approved a higher-dose naloxone hydrochloride nasal spray (Kloxxado) for the emergency treatment of known or suspected opioid overdose, as manifested by respiratory and/or central nervous system depression.

When administered quickly, naloxone can counter opioid overdose effects, usually within minutes. A higher dose of naloxone provides an additional option for the treatment of opioid overdoses, the FDA said in a news release.

“Addressing the opioid crisis is a top priority for the FDA, and we will continue our efforts to increase access to naloxone and place this important medicine in the hands of those who need it most,” said Cavazzoni.

In a company news release announcing the approval, manufacturer Hikma Pharmaceuticals notes that a recent survey of community organizations in which the 4-mg naloxone nasal spray had been distributed showed that for 34% of attempted reversals, two or more doses of naloxone were used.

A separate study found that the percentage of overdose-related emergency medical service calls in the United States that led to the administration of multiple doses of naloxone increased to 21% during the period 2013–2016, which represents a 43% increase over 4 years.

“The approval of Kloxxado is an important step in providing patients, friends, and family members ― as well as the public health community ― with an important new option for treating opioid overdose,” Brian Hoffmann, president of Hikma Generics, said in the release.

The company expects Kloxxado to available in the second half of 2021.

The FDA approved Kloxxado through the 505(b)(2) regulatory pathway, which allows the agency to refer to previous findings of safety and efficacy for an already-approved product, as well as to review findings from further studies of the product.