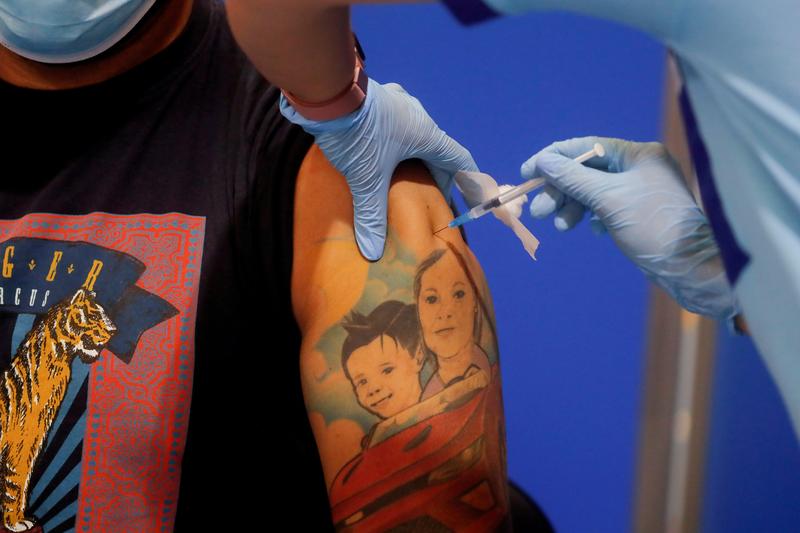 (Reuters) – The Asia-Pacific region continues to battle major outbreaks due to the highly contagious Delta variant, while worries about Johnson & Johnson’s vaccine emerged after rare cases of a neurological disorder were reported weeks after inoculation.

FILE PHOTO: A healthcare worker administers the first dose of the Comirnaty Pfizer–BioNTech COVID-19 vaccine against the coronavirus disease (COVID-19) to a man at a vaccination centre in Ronda, Spain June 30, 2021. REUTERS/Jon Nazca

* All health workers in France must get COVID-19 jabs and anyone wanting to get into a cinema or board a train will need to show proof of vaccination or a negative test under new rules announced by President Emmanuel Macron.

* Dutch Prime Minister Mark Rutte conceded that restrictions had been lifted too soon in the Netherlands and he apologised as infections surged to their highest levels of the year.

* South Korea reported more than 1,000 new cases for a seventh straight day, as the country battles its worst-ever outbreak spurred by the highly contagious Delta variant

* Australia reported a slight easing in new COVID-19 cases in Sydney but left open the possibility of extending a lockdown in the country’s largest city.

India’s full rollout of the Sputnik V vaccine will have to be put on hold until the Russian producer provides equal quantities of its two differing doses, Dr. Reddy’s Laboratories Ltd said.

* Thailand will use AstraZeneca’s vaccine as a second dose for those who received Sinovac’s shot as their first dose.

* At the request of the Supreme Court, Brazil’s federal police has formally opened a probe into President Jair Bolsonaro related to alleged irregularities in the purchase of an Indian vaccine and could now question him, a source with knowledge of the matter said.

* At least 44 people were killed and over 67 injured in a fire likely caused by an oxygen tank explosion at a coronavirus hospital in Iraq’s southern city of Nassiriya.

* The Kuwaiti Cabinet decided to close all activities for children, including summer clubs, from July 25 until further notice.

* Johnson & Johnson said it is in discussions with the U.S. FDA, which added a warning to the company’s vaccine factsheet after rare cases of a neurological disorder, Guillain-Barré syndrome, were reported six weeks after inoculation.

* China’s customs administration spokesperson Li Kuiwen said the country’s trade may slow in the second half of 2021, mainly reflecting the statistical impact of the high growth rate last year.

* The European Central Bank will start tapering its pandemic-related asset purchases after its September meeting and stop buying them by the end of March, according to a Reuters poll.