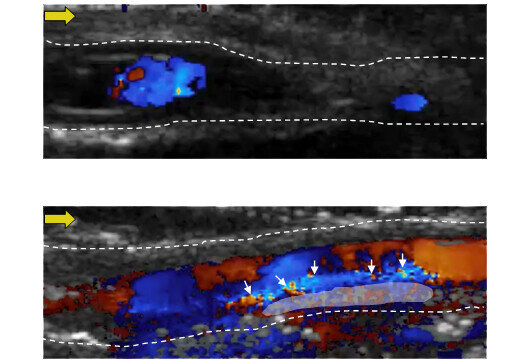 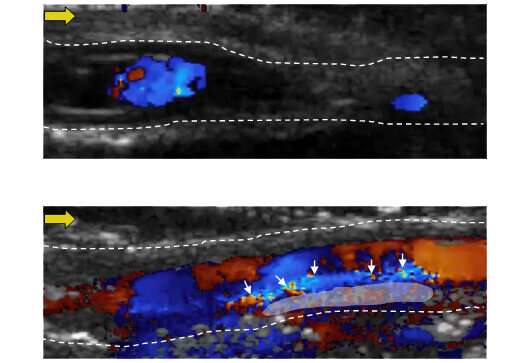 Penn State College of Engineering researchers set out to develop technology capable of localizing and imaging blood clots in deep veins. Turns out their work may not only identify blood clots, but it may also be able to treat them.

“Deep vein thrombosis is the formation of blood clots in deep veins, typically in a person’s legs,” said Medina. “It’s a life-threatening blood clotting condition that, if left unaddressed, can cause deadly pulmonary embolisms—when the clot travels to the lungs and blocks an artery. To manage DVT, and prevent these life-threating complications, it’s critical to be able to rapidly detect, monitor and treat it.”

The challenge, according to Medina, is that current diagnostic imaging methods lack the resolution required to precisely pinpoint potential breeding grounds for clots and monitor the clots in real time. DVT can sometimes present as swelling and aching in a person’s leg, which can then be examined via ultrasound.

“Ultrasound isn’t great for diagnosing DVT,” Medina said. “It can tell you that a region of fluid flow may look odd, which might be related to a clot—but maybe not. You follow up with blood tests to look for specific factors, and, together, you might be able to diagnose a clot.”

Once a clot is diagnosed, a clinician may order either pharmaceuticals to help break it apart or a procedure that involves snaking a probe to the clot to grab it and physically remove it from the body. The pharmaceuticals may not be enough to break the clot apart, though, or they could trigger bleeding issues elsewhere in the body, while the procedure option is invasive and carries risks, including potential infection.

To better identify the location, composition and size of clots, which informs how to treat them, Medina and his team used a particle approach they developed in 2017. Called nanopeptisomes (NPeps), the particles comprise a shell around a droplet of fluorine-based oil similar to liquid Teflon. The surface of the shell holds a molecule that finds and binds a protein on the surface of activated platelets, a key cellular component of clots.

“The particles bind to the surface of the clots, we apply the ultrasound, and the droplet turns to gas and forms a bubble under the shell,” said Medina. “It gives an excellent contrast for imaging. The bubbles appear exactly where the clots are forming.”

But, Medina said, a mystery unfolded as they tested their technique. To analyze how to diagnose and treat clots, the researchers first induce clots in bovine veins by injecting an enzyme that triggers clot formation.

The team tested its hypothesis, but the researchers would lose the bubble signal after 15 minutes of ultrasound every time.

“We think that once our particles start to decorate the clot, they saturate the surface and inhibit the mechanisms of further clot growth,” said Medina. “And under the ultrasound, the particles are disrupting the clot or inhibiting its mechanism to persist. While we don’t understand the underlying mechanism yet, it’s clear that these particles can image and help treat clots in real time.”