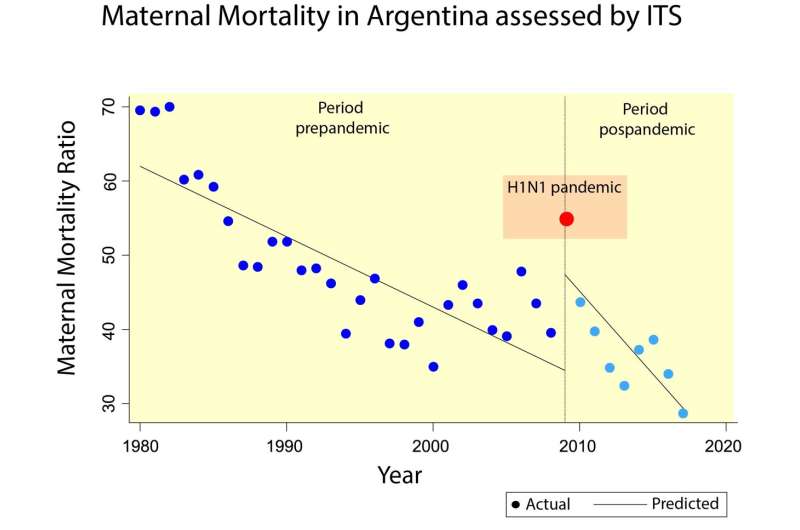 Emerging viruses can adversely affect women’s health, leading to an increase in both complications and deaths during pregnancy, childbirth and the puerperium. This is indicated by a population-based natural experiment on the 2009 H1N1 influenza pandemic and conducted on the basis of national vital Argentine records of maternal deaths. The research was published in The Lancet Regional Health—Americas.

In this collaborative study—led by Dr. Elard Koch, senior epidemiologist at the MELISA Institute (Chile) and carried out by a team of researchers affiliated with academic centers in Argentina, Peru and Chile—a 38-year time series of Argentine vital records was used to assess the trend of the maternal mortality ratio (the ratio between the number of maternal deaths and live births at the national level multiplied by 100,000 each year) for specific causes before, during and after the global outbreak caused by the pandemic H1N1 influenza virus in 2009.

According to Dr. Koch, it is critically relevant to know the sensitivity of vital records of live births and maternal deaths to explore potential deleterious effects of a new pathogen on specific organs or systems, stages of pregnancy, comorbidities, and ultimately, on the offspring. “In recent decades, vital records have improved, confirming a reduction in maternal mortality in most Latin American countries. However, it is not clear whether this improvement derived in an increased sensitivity to detect specific effects of new virus-triggered pandemics,” the epidemiologist emphasized.

Unlike randomized experiments or clinical trials, in which researchers have full control of an intervention, natural population experiments use long interrupted time series (ITS) to capture the effect of a causal factor by assessing underlying mortality trends before and after the introduction of an exogenous event that affects an entire population. This type of design is therefore ideal for quantifying the consequences of new public policies or natural disasters such as epidemics triggered by new viruses.

As regards the methodology used, for Maria Elena Critto, doctoral fellow at the MELISA Institute and main author of the article, before the current public health crisis triggered by SARS-CoV-2, the 2009 H1N1 influenza pandemic provides the most recent epidemiological experience to assess whether official records of the Ministry of Health of Argentina are sensitive enough to detect specific consequences of an emerging pathogen on maternal health. “The results obtained not only identified a significant and transient impact of a pandemic virus on maternal health, but also confirm that Argentine vital records can be used to investigate specific effects of the current SARS-CoV-2 outbreak and any other emerging pathogens in the future,” the researcher added.

The study confirmed what is known as the “obstetric transition,” which is mainly characterized by changes in the predominance of deaths from direct obstetric causes to indirect causes. In fact, a 58.6% reduction in total maternal mortality was identified during the 38 years studied. The main causes of maternal death that contributed to this decline were hemorrhage (10.2 to 2,3 per 100.000 live births, 77.7%) and abortive outcomes (from 24.5 to 4.3 per 100.000 live births 82.6%). However, there was an increase in indirect causes (2.6 to 7.7 per 100.000 live births, 197%) due to non-pregnancy comorbidities, including cardiovascular disease, diabetes, cancer, kidney failure, and other chronic conditions.

Argentine data are consistent with recent studies conducted in Chile, Mexico and Brazil, thus providing an excellent example of progress in reducing maternal mortality in Latin America over recent decades. The challenge now is to prevent deaths from chronic diseases that may complicate pregnancy and are increasingly frequent due to the postponement and accelerated aging of motherhood in the region.

For Adolfo Etchegaray, a specialist researcher in maternal and fetal medicine at the Austral University (Universidad Austral), the research clearly shows a change in the scenario regarding the specific causes and challenges of maternal morbidity and mortality. “It is important that this information is taken into account by decision-makers as a starting point for prioritizing public health strategies and policies aimed at primary prevention of this population for the next few years,” highlighted the Argentine specialist.

One of the most relevant findings of the study is to illustrate how a pandemic pathogen is capable of having very specific, abrupt, and transient fatal effects on a country’s historical maternal mortality trend.

In the period studied (from 1980 to 2017), a peak in the Argentine maternal mortality ratio was recorded during the 2009 H1N1 influenza pandemic, and then declined rapidly again. “Total maternal mortality was falling at a steady rate of -0.94 per 100.000 live births, reversed abruptly in 2009 with an increase of 12.74 per 100.000 live births, and then resumed a downward trend,” said Yordanis Enriquez, Ph.D. and researcher at the Catholic University Sedes Sapientiae (Peru), who performed the statistical analyzes of ITS.

When analyzing the specific causes of mortality, the researchers realized that the increase in maternal mortality was almost exclusively restricted to respiratory complications and sepsis, without affecting other causes of mortality. Dr. Koch explained that thanks to the advancement and development of antibiotics, maternal death from sepsis during pregnancy is becoming increasingly less frequent, but the pandemic H1N1 virus had a clear and significant regressive effect on these kinds of complications. “During pregnancy, physiological and immunological changes predispose the pregnant woman to systemic infections that may be aggravated by influenza, which in turn is more frequent and at higher risk during pregnancy,” the epidemiologist remarked.

As regards the importance of the study to epidemiological surveillance of the current SARS-CoV-2 pandemic virus, the researchers agree on the importance of investigating the specific damage of this coronavirus to maternal health. “It is important to establish whether the new pandemic coronavirus may also be increasing maternal mortality from sepsis and other chronic non-respiratory comorbidities and to know whether these complications are prone to endemic variants over time,” stated researcher Ruth Weinberg, OB/GYN medical doctor from the University of Buenos Aires.

There are already reports of an increase in maternal mortality in Mexico and Brazil apparently related to the ongoing COVID-19 pandemic. “Unlike H1N1 pandemic virus, the new SARS-CoV-2 pandemic coronavirus seems to cause complications not only restricted to the respiratory system; new studies may give us greater knowledge of its specific consequences during pregnancy, childbirth and the puerperium,” Dr. Koch stressed. 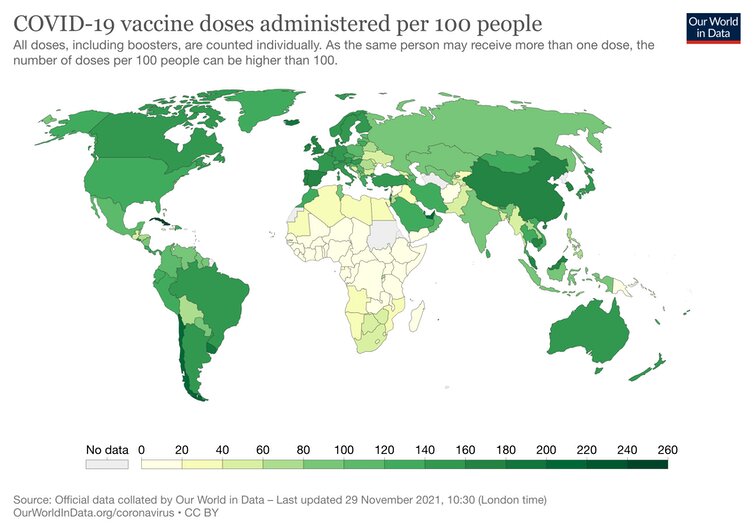 Next post Wealthy nations starved the developing world of vaccines, and omicron shows the cost of this greed