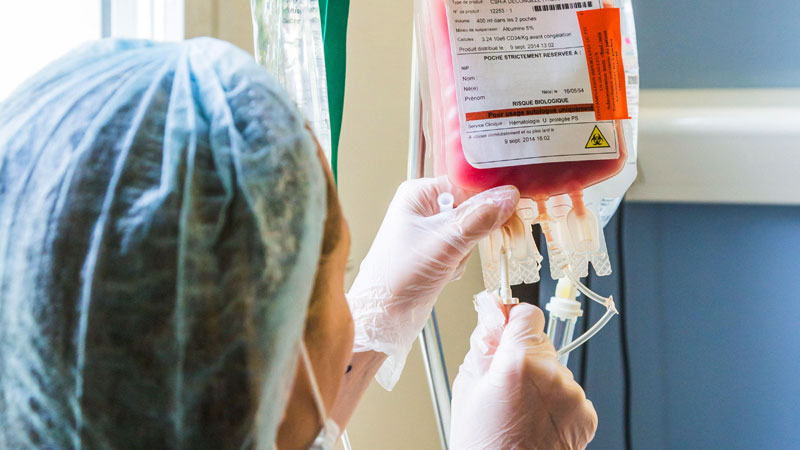 Despite improvements in prevention of graft-versus-host disease, chronic GVHD still occurs in 10%-50% of patients who undergo an allogeneic hematopoietic stem cell transplant, and these patients may require prolonged treatment with multiple lines of therapy, said a hematologist and transplant researcher.

Although the incidence of chronic GVHD has gradually declined over the last 40 years and both relapse-free and overall survival following a chronic GVHD diagnosis have improved, “for patients who are diagnosed with chronic GVHD, they still will see many lines of therapy and many years of therapy,” she said.

Salvage therapies for patients with chronic GVHD have evolved away from immunomodulators and immunosuppressants in the early 1990s, toward monoclonal antibodies such as rituximab in the early 2000s, to interleukin-2 and to tyrosine kinase inhibitors such as ruxolitinib (Jakafi) and ibrutinib (Imbruvica).

There are currently 36 agents that are FDA approved for at least one indication and can also be prescribed for the treatment of chronic GVHD, Lee noted.

Lee laid out six goals for treating patients with chronic GVHD. They include:

Lee identified 33 trials with chronic GVHD as an indication that are currently recruiting, and an additional 13 trials that are active but closed to recruiting. The trials can be generally grouped by mechanism of action, and involve agents targeting T-regulatory cells, B cells and/or B-cell receptor (BCR) signaling, monocytes/macrophages, costimulatory blockage, a proteasome inhibition, Janus kinase (JAK) 1/2 inhibitors, ROCK2 inhibitors, hedgehog pathway inhibition, cellular therapy, and organ-targeted therapy.

Most of the trials have overall response rate as the primary endpoint, and all but five are currently in phase 1 or 2. The currently active phase 3 trials include two with ibrutinib, one with the investigational agent itacitinib, one with ruxolitinib, and one with mesenchymal stem cells.

“I’ll note that, when results are reported, the denominator really matters for the overall response rate, especially if you’re talking about small trials, because if you require the patient to be treated with an agent for a certain period of time, and you take out all the people who didn’t make it to that time point, then your overall response rate looks better,” she said.

The first-in-class Bruton tyrosine kinase (BTK) inhibitor ibrutinib was the first and thus far only agent approved by the Food and Drug Administration for chronic GVHD. The approval was based on a single-arm, multicenter trial with 42 patients.

The ORR in this trial was 69%, consisting of 31% complete responses and 38% partial responses, with a duration of response longer than 10 months in slightly more than half of all patients. In all, 24% of patients had improvement of symptoms in two consecutive visits, and 29% continued on ibrutinib at the time of the primary analysis in 2017.

Based on these promising results, acalabrutinib, which is more potent and selective for BTK than ibrutinib, with no effect on either platelets or natural killer cells, is currently under investigation in a phase 2 trial in 50 patients at a dose of 100 mg orally twice daily.

The JAK1 inhibitor itacitinib failed to meet its primary ORR endpoint in the phase 3 GRAVITAS-301 study, according to a press release, but the manufacturer (Incyte) said that it is continuing its commitment to JAK inhibitors with ruxolitinib, which has shown activity against acute, steroid-refractory GVHD, and is being explored for prevention of chronic GVHD in the randomized, phase 3 REACH3 study.

The trial met its primary endpoint for a higher ORR at week 24 with ruxolitinib versus best available therapy, at 49.7% versus 25.6%, respectively, which translated into an odds ratio for response with the JAK inhibitor of 2.99 (P < .0001).

Efavaleukin alfa is an IL-2-mutated protein (mutein), with a mutation in the IL-2RB-binding portion of IL-2 causing increased selectivity for regulatory T-cell expansion. It is bound to an IgG-Fc domain that is itself mutated, with reduced Fc receptor binding and IgG effector function to give it a longer half life. This agent is being studied in a phase 1/2 trial in a subcutaneous formulation delivered every 1 or 2 weeks to 68 patients.

Axatilimab is a high-affinity antibody targeting colony stimulating factor–1 receptor (CSF-1R) expressed on monocytes and macrophages. By blocking CSF-1R, it depletes circulation of nonclassical monocytes and prevents the differentiation and survival of M2 macrophages in tissue.

It is currently being investigated 30 patients in a phase 1/2 study in an intravenous formulation delivered over 30 minutes every 2-4 weeks.

There is evidence suggesting that hedgehog pathway inhibition can lessen fibrosis. Glasdegib (Daurismo) a potent selective oral inhibitor of the hedgehog signaling pathway, is approved for use with low-dose cytarabine for patients with newly diagnosed acute myeloid leukemia aged older than 75 years or have comorbidities precluding intensive chemotherapy.

This agent is associated with drug intolerance because of muscle spasms, dysgeusia, and alopecia, however.

This drug has been studied in a dose-escalation study and a phase 2 trial, in which 132 participants were randomized to receive belumosudil 200 mg either once or twice daily.

At a median follow-up of 8 months, the ORR with belumosudil 200 mg once and twice daily was 73% and 74%, respectively. Similar results were seen in patients who had previously received either ruxolitinib or ibrutinib. High response rates were seen in patients with severe chronic GVHD, involvement of four or more organs and a refractory response to their last line of therapy.

“We’re very hopeful for many of these agents, but we have to acknowledge that there are still many management dilemmas, patients that we just don’t really know what to do with,” Lee said. “These include patients who have bad sclerosis and fasciitis, nonhealing skin ulcers, bronchiolitis obliterans, serositis that can be very difficult to manage, severe keratoconjunctivitis that can be eyesight threatening, nonhealing mouth ulcers, esophageal structures, and always patients who have frequent infections.

“We are hopeful that some these agents will be useful for our patients who have severe manifestations, but often the number of patients with these manifestations in the trials is too low to say something specific about them,” she added.

“It’s an exciting time because there are a lot of different drugs that are being studied for chronic GVHD,” commented Betty Hamilton, MD, a hematologist/oncologist at the Cleveland Clinic.

“I think that where the field is going in terms of treatment is recognizing that chronic GVHD is a pretty heterogeneous disease, and we have to learn even more about the underlying biologic pathways to be able to determine which class of drugs to use and when,” she said in an interview.

She agreed with Lee that the goals of treating patients with chronic GVHD include improving symptoms and quality, preventing progression, ideally tapering patients off immunosuppression, and achieving a balance between preventing negative consequences of GVHD while maintain the benefits of a graft-versus-leukemia effect.

“In our center, drug choice is based on physician preference and comfort with how often they’ve used the drug, patients’ comorbidities, toxicities of the drug, and logistical considerations,” Hamilton said.