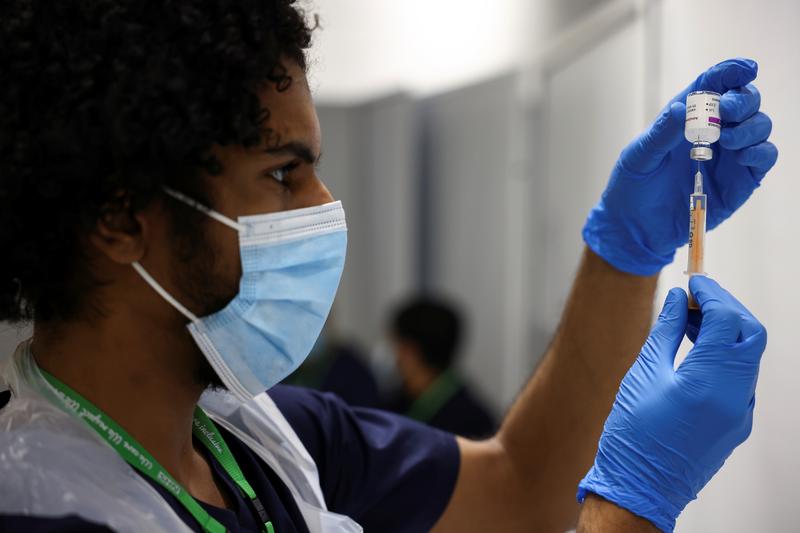 A health worker prepares an injection with a dose of Astra Zeneca coronavirus vaccine, at a vaccination centre in Westfield Stratford City shopping centre, amid the outbreak of coronavirus disease (COVID-19), in London, Britain, February 18, 2021. REUTERS/Henry Nicholls

Johnson’s Britain holds the presidency of the Group of 7 developed economies in 2021 and wants to use it to build momentum for a more coordinated approach to future pandemics, including the creation of a global health treaty.

The 1400 GMT call will be Biden’s first multilateral engagement since he took over from Donald Trump whose unorthodox approach to G7 meetings often left attempts to build international consensus in disarray.

Johnson wants to seize on the change in U.S. leadership and the trail of destruction left by the COVID-19 pandemic to put three items at the top of the global agenda: health, climate change and a rebound which distributes economic benefits more fairly.

He will kick off that agenda on Friday by promising to share surplus vaccine doses with developing countries and calling for help to develop vaccines more quickly.

“By harnessing our collective ingenuity, we can ensure we have the vaccines, treatments and tests to be battle-ready for future health threats, as we beat Covid-19 and build back better together,” Johnson said in a statement ahead of the meeting.

It took 314 days from the first identification of a COVID-19 cluster in China in December to the first successful vaccine trial results.

Britain hailed that as a huge achievement but said next time it must be done faster, backing a 100-day target previously set out by the Coalition for Epidemic Preparedness Innovations.

“As leaders of the G7 we must say today: never again,” Johnson will tell the United States, Japan, Germany, France, Italy and Canada.

Johnson will commit to sending the majority of any surplus COVID-19 vaccines it has later in the year to the COVAX scheme which helps supply jabs to poorer nations. He will encourage other G7 nations to do the same.