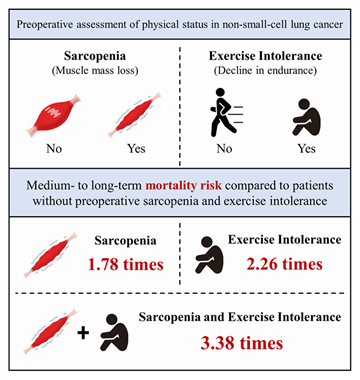 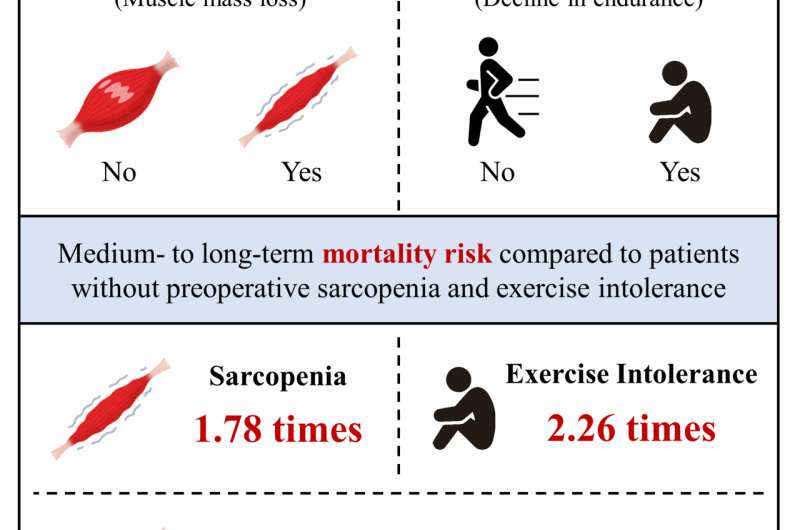 Lung cancer is a major global cause of mortality, reportedly accounting for 1.7 million deaths each year. The most common form of lung cancer is non-small-cell lung cancer (NSCLC), and early-stage NSCLCs can often be surgically resected. Unfortunately, some patients still experience poor outcomes after surgical resection, prompting further research on the relationship between a patient’s preoperative status and the likelihood of good postoperative outcomes.

Given this need for information, Dr. Shinya Tanaka from the Department of Rehabilitation and Prof. Naoki Ozeki from the Department of Thoracic Surgery, Nagoya University, and their colleagues decided to investigate. Previous studies had identified some risk factors for mortality after NSCLC resection, including sarcopenia, which is defined as the progressive loss of muscle mass and strength and predominantly occurs in older individuals. Another known risk factor for unfavorable postoperative outcomes is poor physical performance as measured with the six-minute walking distance (6MWD) test, which involves measuring how far a patient can walk on a corridor in the span of six minutes.

To Dr. Tanaka and Prof. Ozeki, these past findings clearly pointed to “the importance of comprehensively assessing a patient’s preoperative physical state in order to determine his or her risks of poor outcomes.” However, no previous study of postoperative outcomes in patients with NSCLC had considered both sarcopenia and physical performance. Dr. Tanaka, Prof. Ozeki, and their colleagues therefore decided to conduct a study that addressed this gap in research. Their findings appear in a paper recently published in the Journal of Cachexia, Sarcopenia and Muscle.

The researchers analyzed data from 587 patients with NSCLC who underwent resection surgeries at Nagoya University Hospital between 2014 and 2017. They focused their analyses on determining how preoperative sarcopenia and exercise intolerance (defined as the inability to walk further than 400 meters on the 6MWD) influenced a patient’s risk of mortality during the postoperative follow-up period, which lasted for 3.1 years on average.

These findings have important implications for the preoperative assessment of patients with NSCLC. In short, when oncologists are attempting to predict postresection prognoses, they should comprehensively consider a patient’s physical status because variables like sarcopenia and exercise intolerance interact with each other to increase a patient’s risk of mortality.