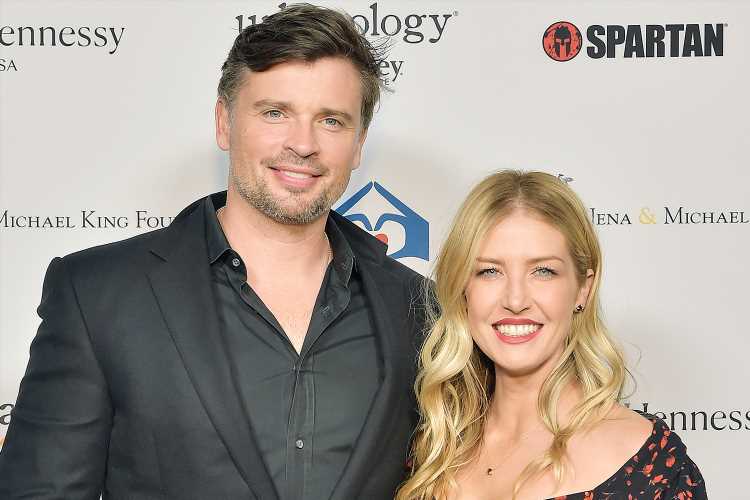 Tom Welling has another little hero on the way!

The Smallville actor, 43, and wife Jessica Rose Lee are expecting their second baby, he revealed with help from his costar from the CW Superman series, Michael Rosenbaum. On Tuesday's episode of Rosenbaum's podcast Inside of You, he broke the happy news, getting Welling to confirm it, though the actor remained mostly mum about the subject.

"Welling shares a secret 🤫 don't miss this week's @insideofyoupodcast with the man himself @tomwelling," Rosenbaum teased on Instagram about the reveal, as Jessica shared the post on her Instagram Story and appeared to confirm the pregnancy news, writing simply "YES."

During the podcast installment, Welling refers to his support system as his "glorious" wife and "hilarious" son Thomson Wylde, 2. Rosenbaum — who played villain Lex Luthor on Smallville (which ran between 2001 and 2011) opposite Welling's Clark Kent — then says to him, "Congrats on the, you know, you've got another kid on the way?"

"What?" Welling jokingly responds, as the two then playfully pretend to have let a secret slip in the interview. Who's Due Next? Celebs Who Are Expecting

"She told you, you lying bastard!" Rosenbaum says. "But you do! You have another one coming. You have little Thomson, he's the cutest little — you know, there's nothing more infuriating than when beautiful people have beautiful children."

"He's a good, cute, funny kid," Welling said of his first child. "He makes me laugh all the time."

The actor and his wife celebrated their one-year wedding anniversary in November. "Happy first anniversary, my love ♥️," Jessica wrote on Instagram, sharing a throwback snapshot from their big day. In the comment section, Welling wrote, "Lucky ME! 😘🙏❤️👏🎉 Happy 1 yr MY LOVE."

On New Year's Eve, Jessica reflected on the year past while looking ahead to 2021. "Closing out 2020 🌟 Wow. What a year. Embracing the silver linings and lessons learned – keeping family and values closer than ever," she wrote. "Wishing all of you health and blessings in the new year. Cherish the little moments…"