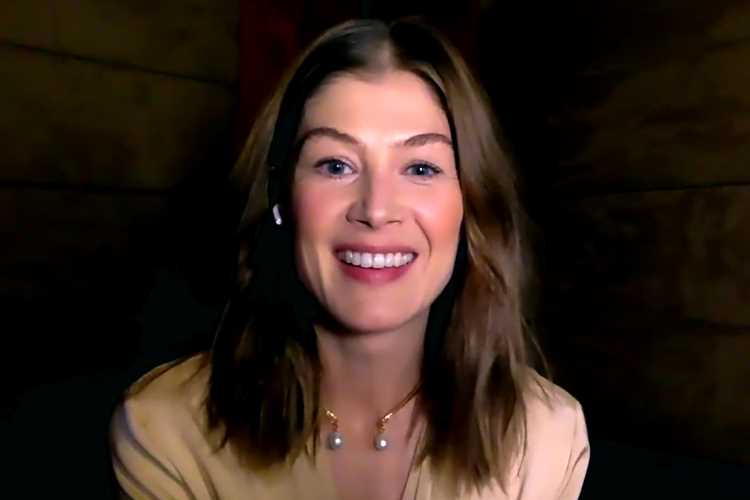 Rosamund Pike is opening up about a day with her boys out that didn't go according to plan.

On Wednesday evening, the 42-year-old actress appeared virtually as a guest on Jimmy Kimmel Live!, where she opened up about accidentally running into a Bachelorette party during an outing with her sons Solo, 8, and Atom, 6.

"Last summer, I took [my children] on what I have heard is very sort of wholesome and traditional Czech activity to do with kids, which is to go river rafting," Pike, who has been living in Prague, began. "And there's a lovely town called Cesky Krumlov quite near Prague and we went. And it's this beautiful stretch of rivers — and there were rapids and weirs — and I took my two boys out on this inflatable raft."

"But what I underestimated is the fact that it's also a very popular Czech pastime for stag do's … or hen day's," the Gone Girl actress continued, referencing what is more commonly known in the United States as a bachelor or bachelorette party. Asked by host Jimmy Kimmel if her two kids "loved" the experience, Pike joked, "They loved it, Jimmy."

"We were traveling along and we came across a group of scantily clad girls … a group of women in bikinis, with a very large inflatable man with a huge erection trailing behind them in the boat," she continued to detail. "So my kids were fascinated."

"And then this man was being lobbed through the air and sent onto the neighboring boat, which was full of, I mean, I promise you, I have never seen drunker human beings than I saw on this boat," Pike added. "Men who stood up and immediately fell flat … and then one who stumbled over the edge [and] got completely sort of drenched in mud and then clambered back into the boat, splattering all the girls with mud."

"I mean, my kids have never stopped sort of acting drunk ever since," she said. "They're emulating it. They thought, this is clearly what adults do. This is our future."

During her chat with Kimmel, 53, the I Care A Lot star also spoke candidly about a project her kids worked on — reviewing various kinds of toothpaste.

"They did [the reviews] because there comes a point in your life where you have to break the news that it's not all about bubblegum and strawberry flavor anymore, right?" Pike asked Kimmel. "There's this awful transition that we all have to make from the sweet world of childhood into the reality of adulthood, which is like menthol and fluoride and stern kind of dental stuff."

Highlighting a series of the kids' reviews — including that Signal toothpaste is "not spicy, very calm" and Colgate Triple Fresh gives "lovely, spaghetti minty breathe" — Kimmel and Pike laughed together and the pair's candid reviews.

"It's nice isn't it that children … don't necessarily know what an adjective has to be," the mother of two joked.