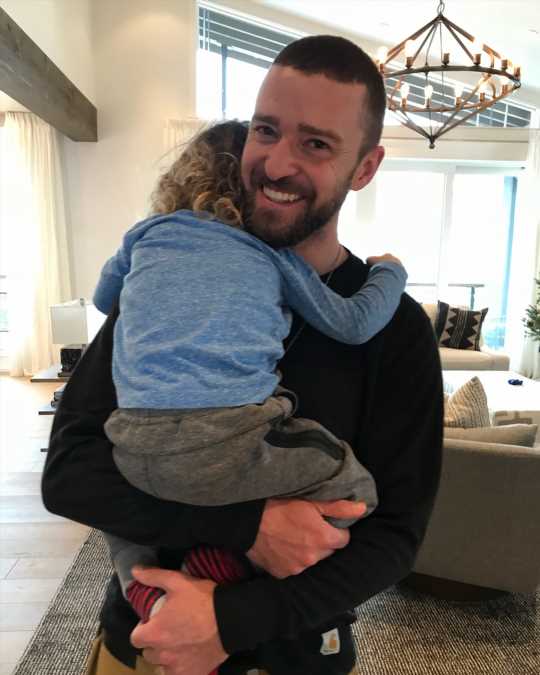 Justin Timberlake is finding a fine line between openness and ensuring privacy for his boys' childhoods.

The Palmer actor, 39, appeared on the latest episode of Dax Shepard's podcast Armchair Expert with Dax Shepard, opening up about parenting his sons Silas, 5, and newborn Phineas, whom he shares with wife Jessica Biel.

The two stars discussed the nuances of masculinity while raising boys, with Shepard, 46, admitting he's glad to have two girls with Kristen Bell, daughters Lincoln, 7, and Delta, 6.

"For me, I didn't have a dad around so I didn't have a guy telling me, 'You're doing it, young man. You're on your way to be a proud man.' So anything my peers deemed masculine or brave, I ran toward it because I just wanted this male approval so much," says Shepard. "I think about it a ton, like it's driven my life so much."

Timberlake shares that his grandfather was an instrumental role model in his own life.

"He was like John Wayne. He was barrel-chested and had a saying for everything," Timberlake says. "I was like, 'Oh, this kid at school was picking on me, Papa' and he'd be like, 'That's not your dog.' He came from a generation of 'rub some dirt on it, don't be a bitch.' … This whole generation of men who were told not to feel."

"Now we have something to figure out about it because now we're being allowed to feel," he adds.

Justin Timberlake and Jessica Biel 'Happy' as They Spend Family Time After Announcing Baby No. 2

"Now we're the grandpa in this scenario, as much as we hate to admit it," says Shepard. "Like, there is some guy in America going, 'Oh, Justin seems to have the way. I kind of want to model him.' It just happens, right?"

"You're saying there's this consciousness now that becomes a little pressurized because you're like, 'What do I need to extract from all of those teachings that's valuable, and how do I trim the fat from the rest of it?' " muses Timberlake.

"It's uncomfortable for all of us, none of us have any f—— training," replies Shepard, to which Timberlake agrees, "It's funny, but also, like, it's a real thing. And raising young males is one thing, and raising young females right now is another thing."

Timberlake says there's "a lot to unpack" with raising boys, as Shepard says he doesn't envy raising boys because "I always fear when I think if we had boys [that] someone's gonna pick on them at school, they're gonna come home upset, I'm gonna hate that, and I'm gonna tell what I know, which is 'Either get punched for the rest of your life or just slug them once. Then it's over.' "

"Thanks, I'll be carrying that around for a week. No, I'm kidding," says Timberlake, as Shepard adds, "You better have your speech ready, other than 'That's not your dog.' "

Timberlake says he tries to be "conscious" of maintaining their childhood innocence, adding that he worries about them being treated differently because of their famous parents.