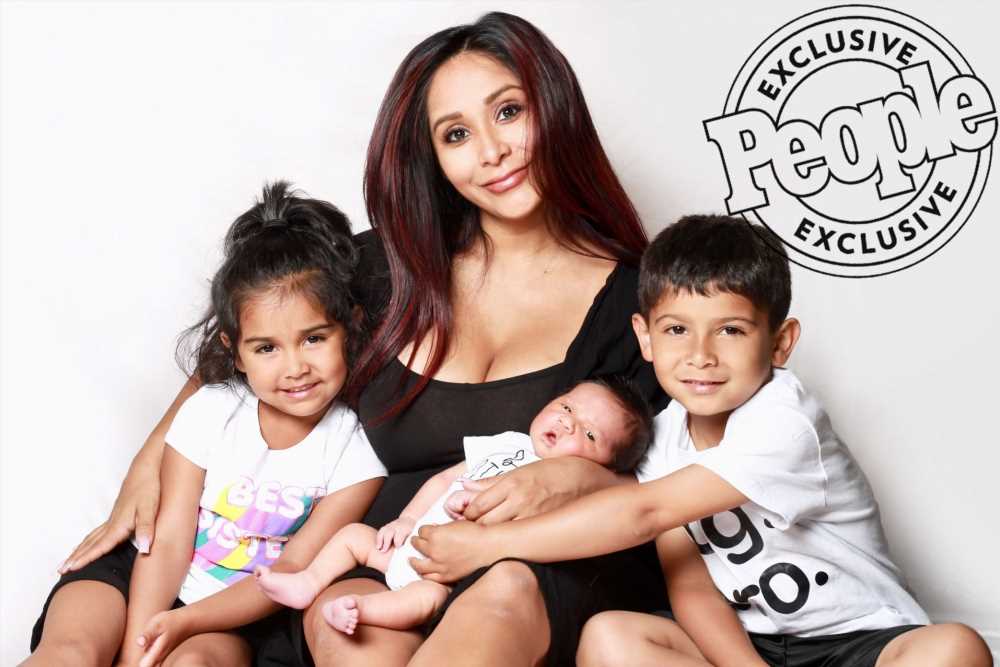 Hidden Cam Warning 👀 Mama getting her groove back… postpartum panties out the door, boobies still off limits lol, but everyday feeling more like me… and my Daddy is getting his grove back. He hits the ballroom once again tonight on @dancingabc So happy my tiny dancer is back. ❤️ Tune in and vote for him tonight! 💋 #teosdaddy @theartemc PS obsessed with my fam @skylargrey and @elliott__taylor new song Claws! Go download it 🙌🏼😻

Nikki revealed to sister Brie on The Bellas Podcast that she and fiancé Artem Chigvintsev “didn’t even make it to the six-week point” and started having sex after five weeks, following the birth of their first child together, son Matteo.

“I was like I’m healed, I’m fine,” Nikki said. “Even though last night it didn’t seem fine, but that’s okay. It was a little different.”

“I felt like organs were about to drop out,” she added. “I was like, shoot, did I mess up?”

“Okay Nicole, enough about all the gross stuff going on with our vaginas, especially yours,” Brie joked in response.

According to the Mayo Clinic, there is no agreed-upon period of time required by doctors before women should begin having sex again after giving birth, but “many health care providers recommend waiting to have sex until four to six weeks after delivery, regardless of the delivery method.” The Jersey Shore: Family Vacation star, who gave birth to her third child Angelo in May 2019, said she “waited six weeks” with daughter Giovanna and son Lorenzo to have sex with husband Jionni LaValle on the Women on Top podcast.

“I waited six weeks with my two older kids because I ripped. This third delivery I didn’t rip probably because I had two kids so my vagina is huge, I guess,” the mom of three said.

“Actually, it doesn’t feel that bad down there. But I still want to wait just in case something happens and I do rip during sex. But after you have a baby vaginally and then have sex, it doesn’t feel right at first,” Polizzi shared.

“It feels like you are a virgin again. It just hurts. It’s uncomfortable. It starts to feel good after you get into the motions, but you need a lot of lube, let’s just put it that way,” she added. The actress, who shares sons Mateo Antoni, Major James and daughter Marlowe Mae with ex-husband Kyle Martino, shared her thoughts on sex after a baby in an essay for PEOPLE in 2015.

“Like the majority of women, when I birthed Marlowe I tore. Badly. Let’s suffice to say I needed a lot of stitches and the healing process was worse than the birth itself,” Amurri wrote. “By the time the famous ‘six week mark’ came around I was totally NOT ready to hop back in the saddle.”

At around nine weeks, the star put aside her exhaustion and anxiety to have sex with then-husband Martino … “and it was TERRIBLE,” she wrote. A month after Jade and Tanner Tolbert welcomed their second child Brooks Easton in July 2019, Tanner got candid on Nick Viall’s podcast, admitting that he felt like he’s “begged” for sex. The Bachelor in Paradise alum said that his relationship with wife Jade had “changed completely” since having kids (they’re also parents to eldest daughter Emmy Avery) and that he wants to have sex more now, while Jade “wants it less.”

“[Our sex life] took a dive [while Jade was nursing], and then pretty much right after the breastfeeding stopped, we got pregnant again with Brooks,” he shared. “And now he’s here and we have two kids. It is tough. I feel like I’ve begged for it. And I don’t want to feel selfish — I hate asking, I hate trying, ’cause I don’t want it to be pity sex.”

That being said, he respects his wife’s priorities and they have honest conversations about it, recognizing that her focus “should be on the kids, not me.” But regardless, “I do feel on the back burner,” Tanner added. On a September episode of their Hot Marriage. Cool Parents. podcast, the Married at First Sight stars Otis and Doug Hehner told listeners that they “still haven’t had sex” since son Hendrix Douglas was born on May 13, due to a combination of health-related factors on Otis’ end.

“[Someone] said, ‘Jamie, you don’t put out,’ and I wanna be like, ‘Excuse me, girlfriend. First of all, I had a 9 lb., 4 oz., baby tear me to shreds downstairs and then at my six-week appointment, I had to have a colposcopy, so I couldn’t have sex again for two weeks,” said the new mother of two. “And then I had [another medical] procedure and couldn’t have sex again for two weeks.”

And while Otis called her husband “the most patient man in the world,” she revealed that she feels like “a completely different person” after having baby number two and can’t quite explain how she feels, but she is feeling “insecure and shy” at the moment.

“It’s not okay, and I’m trying to figure it out,” she added. After son Titan came into the picture in November 2014, the star said that parenthood brought her and husband Tim Weatherspoon closer, and that she was ready to get things “rocking again” postpartum.

“You know, that six-week period [after childbirth] feels like forever, and as a gentleman — [Tim’s] very gentle, so he wanted to give me a little more space. I’m like, ‘No,'” she joked to ET. “‘Let’s go!’ I’m still a mom and it doesn’t matter… I’m a woman and I have physical needs.” The Hills star said she struggled to be intimate with husband Tim Rosenman after giving birth to son Sonny Sanford in July 2017.

She continued, “I remember that being a bit of an inhibitor to our sex life because I wasn’t fully able to enjoy myself because I was so self-conscious of what he was thinking about my body at that time.”

Port shared that her body felt “a little bit back to normal” once she was done breastfeeding her son. She and Rosenman’s intimacy then strengthened.

“Give yourself a little bit of a break in the beginning. You may feel self-conscious about getting back into bed with him,” she told her listeners. “I would try not to spiral.” The now-mom of three told sister Kim that having sex after son Mason Disick was born was “very painful,” in a 2010 episode of Keeping Up with the Kardashians, HuffPost reported.

“Most people can have sex six weeks after, but the doctor told me to wait two months,” said Kourtney.

“I don’t know, but once the doctor gave us the okay, we were like excited to try it, but it was very painful,” Kourtney said. “It felt like a metal pole is literally ramming you in the crotch.” The singer got super candid about parenthood with husband Carey Hart and their two kids Willow and Jameson, in a October 2017 interview with The Guardian.

“There are moments where I look at [Hart] and he is the most thoughtful, logical, constant … he’s like a rock. He’s a good man. He’s a good dad. He’s just the kind of dad I thought he’d be and then some,” she said. “And then I’ll look at him and go: I’ve never liked you. There’s nothing I like about you. We have nothing in common. I don’t like any of the s–t you like. I don’t ever wanna see you again. Then two weeks later I’m like, things are going so good, you guys.”

“Then you’ll go through times when you haven’t had sex in a year. Is this bed death? Is this the end of it? Do I want him? Does he want me?” she continued, before adding, “Monogamy is work! But you do the work and it’s good again.”